A number of other vessels have been broken up or rescued from Hooe Lake.

Please get in touch if you have any information about these vessels by sending us a message below.

The Tamar sailing barge Shamrock was built in 1899 by Frederick Hawke of Stonehouse in Plymouth with official number 111344. This vessel was used for regular trade between Plymouth and the Torpoint Manure Works, but in 1919 was sold and was used for transporting stone along the coast of Devon and Cornwall. In 1962 she had two engines fitted and was converted to a twin screw salvage and prospecting dredger, then sold again in 1966 and used as a diving tender in Plymouth. By the early 1970s she was used as a scrap iron store in Hooe Lake and in 1973 was sold to John Fildew who started to restore her. The Maritime Trust, the National Maritime Museum and The National Trust supported the idea that she should be saved and the hulk was moved to Cothele Quay to be rebuilt, a job completed in 1979.

During the rebuilding work on Shamrock there was a problem getting hold of ironwork for hanging knees and deck and mast fittings as they were were no longer manufactured, but many such items were found on the hulk of the schooner Millom Castle

in the River Lynher and recovered by a naval party from HMS Raleigh, Devonport.

The story of Shamrock is told in the book The Restoration of the Ketch-rigged Tamar Sailing Barge Shamrock 1974-79 by Alan Viner.

Sadly the vessel is no longer in good condition. The National Trust have started The Save Shamrock Appeal

as they urgently need to raise £120k to replace her false keel and keelson and get her back on the water. 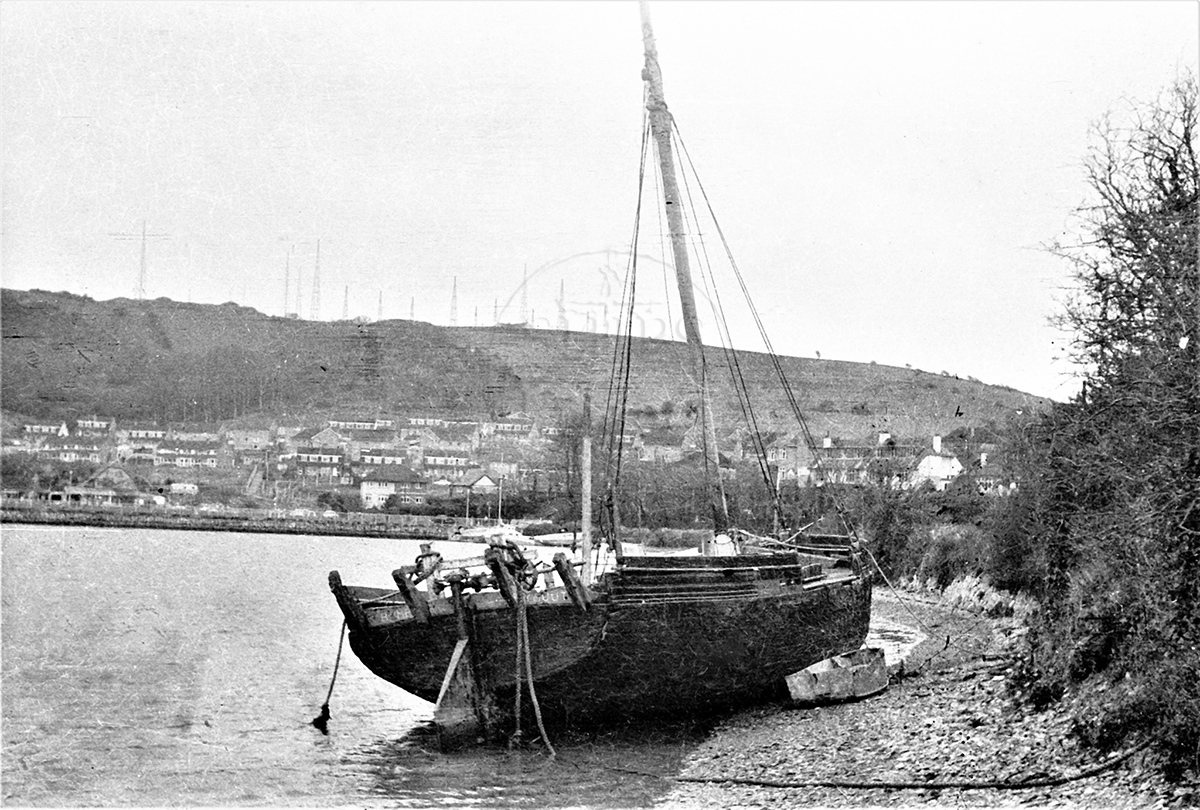 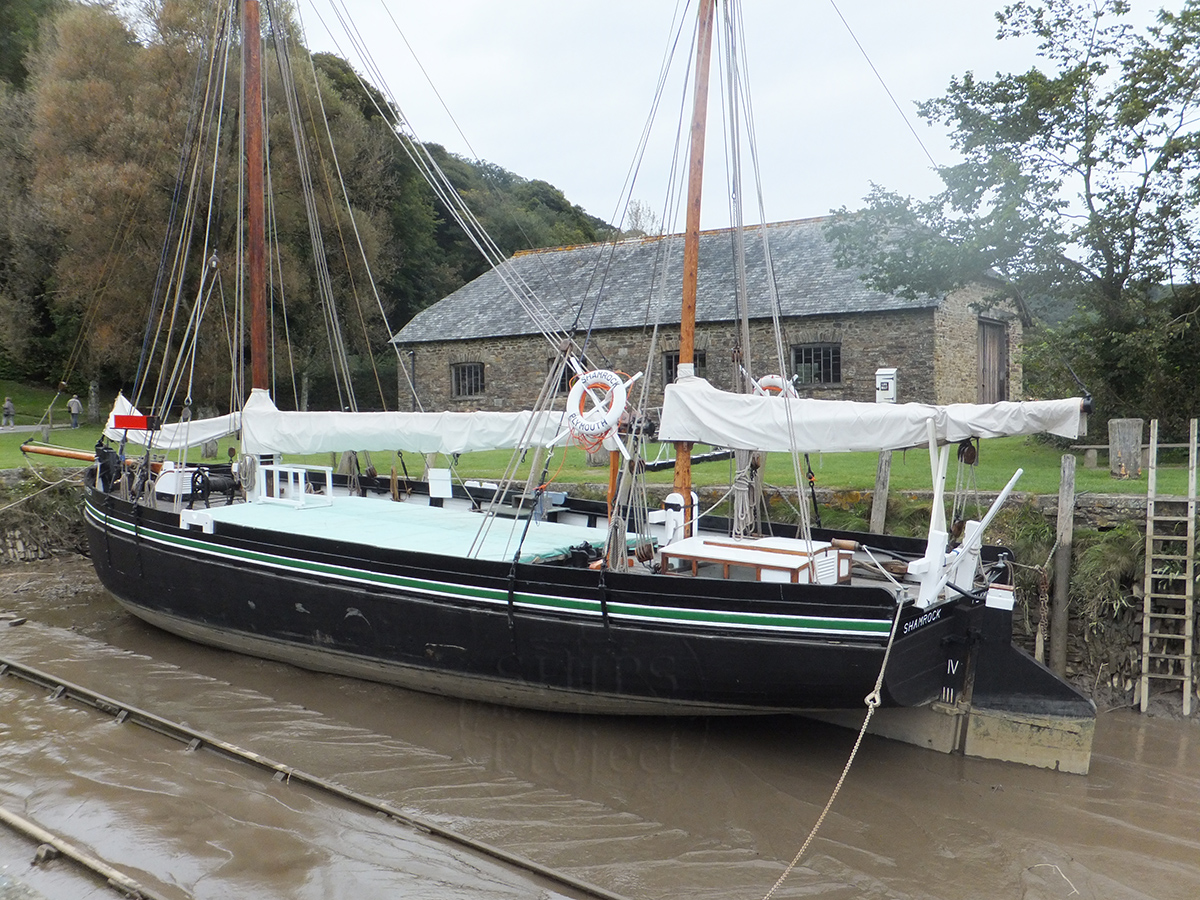 A restored Shamrock at Cothele in 2012

A steel tug was broken up in Hooe Lake in the 1990s, but was used for a Nautical Archaeology Society training course when partly dismantled. This was probably one of the two Admiralty 60ft harbour launches abandoned in the lake. 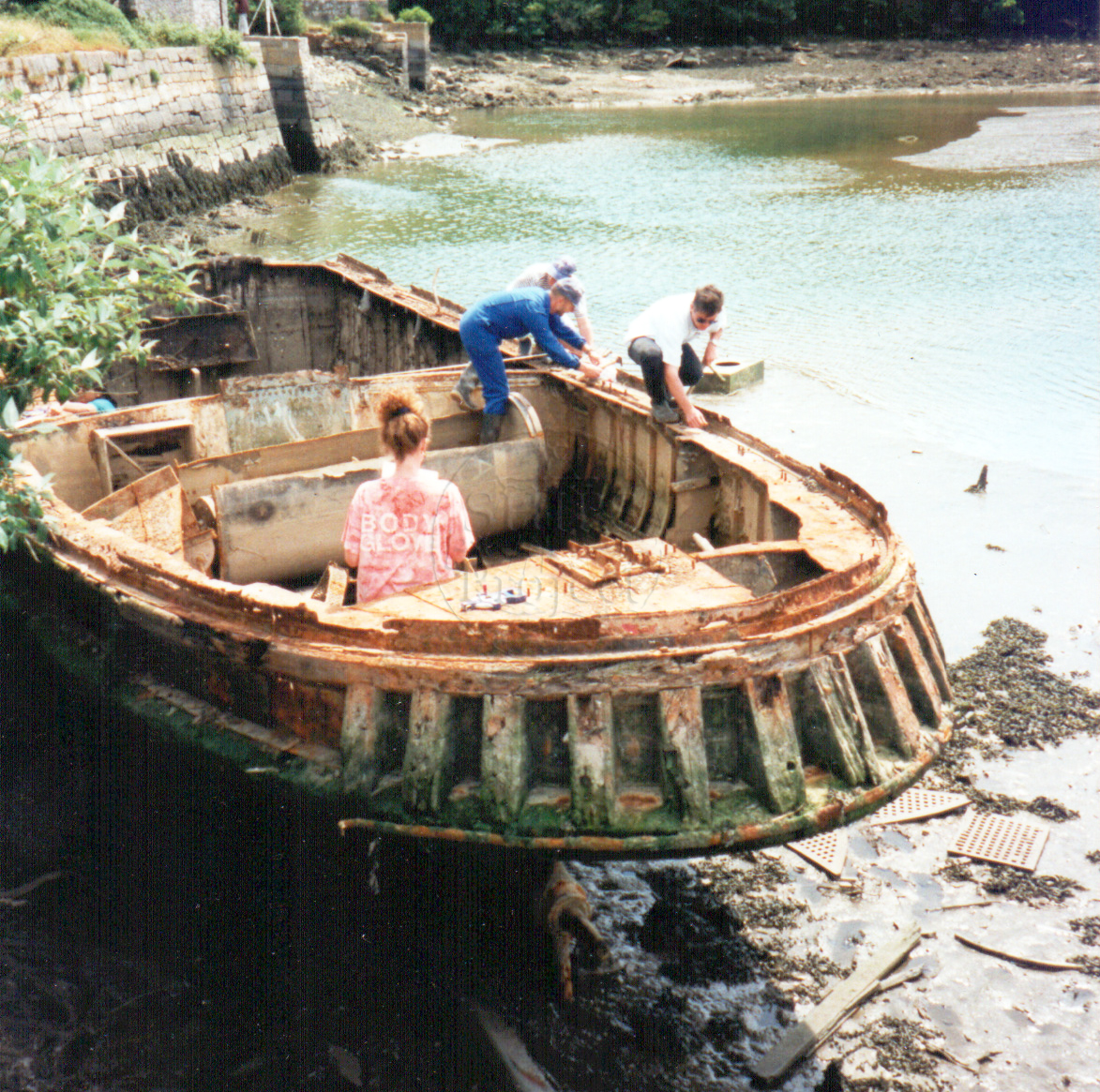 This wooden fishing boat was moored in the middle of the lake at the eastern end but was then moved to the south shore by Hexton Quay where she was broken up. The French built vivier crabber was registered in Guernsey as GU485. Thanks to Martin Johns for the identification. 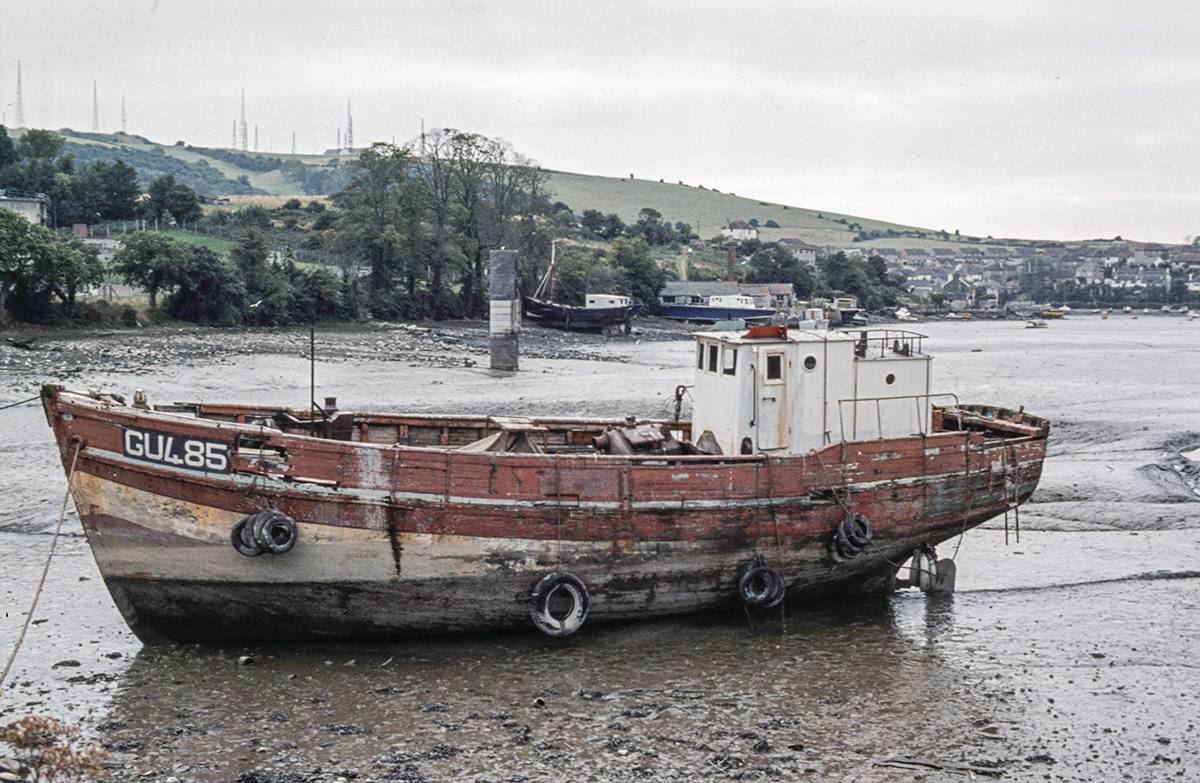 The decommissioned and partly scrapped steel tug boat Wendy Ann II was rescued from Hooe Lake in 1998, taken to Millbrook Lake and rebuilt. The 19.2m (63ft) long 60ton tug was built by Yarwood, W J & Sons Ltd in Northwich in 1939 as the C129. The tug was employed at Devonport Dockyard between 1941 and 1952 when she was placed in reserve, then was sold to the Harry Rose Towage Company of Poole in 1955 being used to assist coal ships onto the gasworks berths. The boat was registered in Poole as the Wendy Ann II in 1963 then sold to the Poole Harbour Commissioners in 1981 then the Sutton Harbour Commissioners in Plymouth in 1984 then a year later to Western Ocean Towage Ltd. In 1990 she was sold to Captain Nicholas Grenney of Plymouth and put in Hooe Lake, before being bought by Robert Wheatley in 1996.

"I felt a sense of desperation and relief to get her away from Hooe Lake to Millbrook as Hooe seemed to be the last resting place of so many vessels."

This tug is now lying on the South Coast, see her page on the National Historic Ships website. 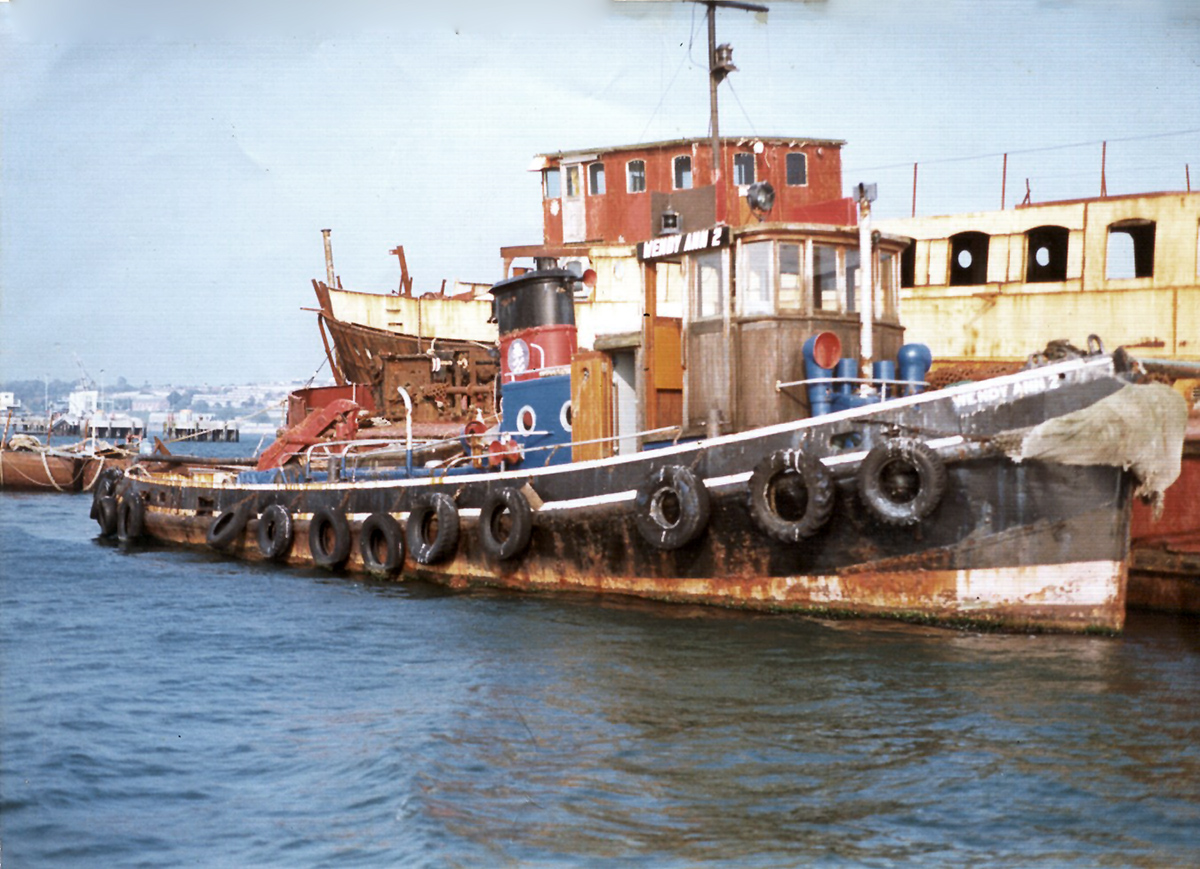 The pink painted boat is an ex-Devonport Dockyard HLD called Clare, it is thought that this vessel was broken up where she lay alongside the Charles Leake II 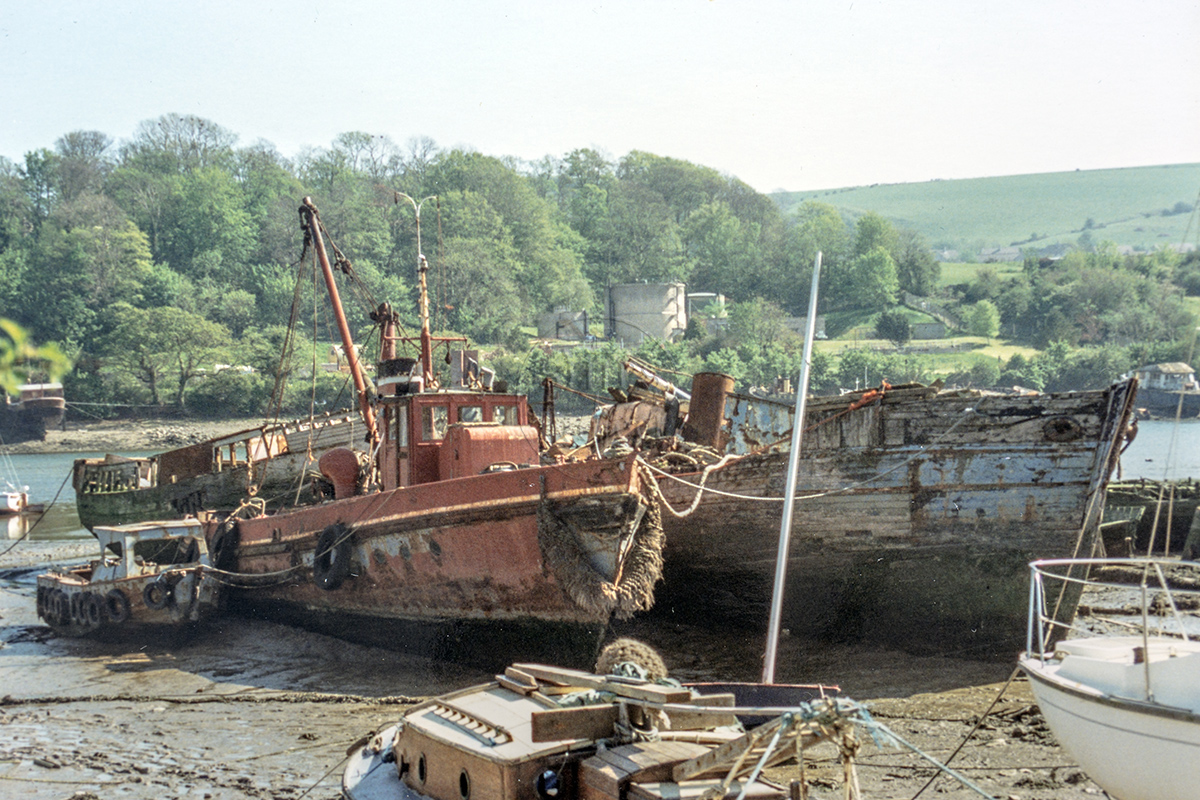 The tug Clare alongside the Charles Leake II

Sea Jade had been abandoned in Hooe Lake between 2007 and 2010 but remained afloat on her mud berth. This 6.7m long Mashfords-built boat was salvaged in April 2021 as part of a campaign to clean up the Lake and was later broken up as she was uneconomical to repair. 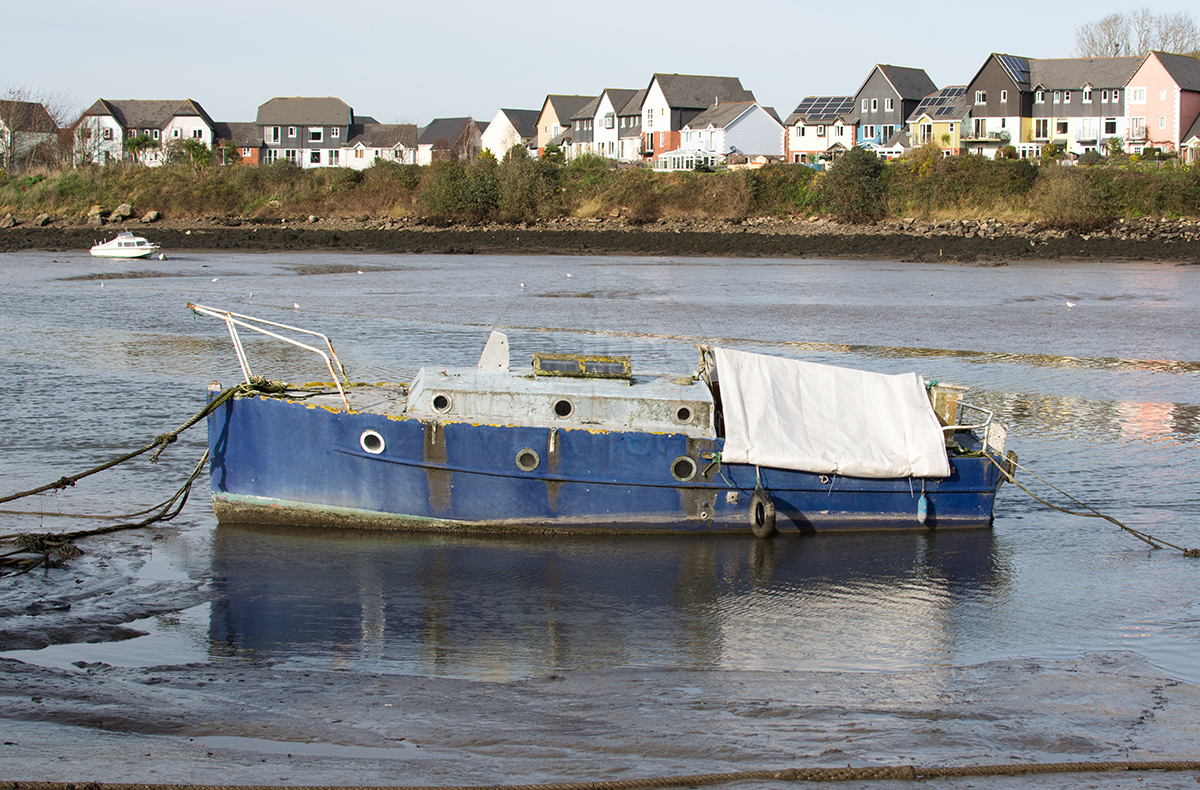 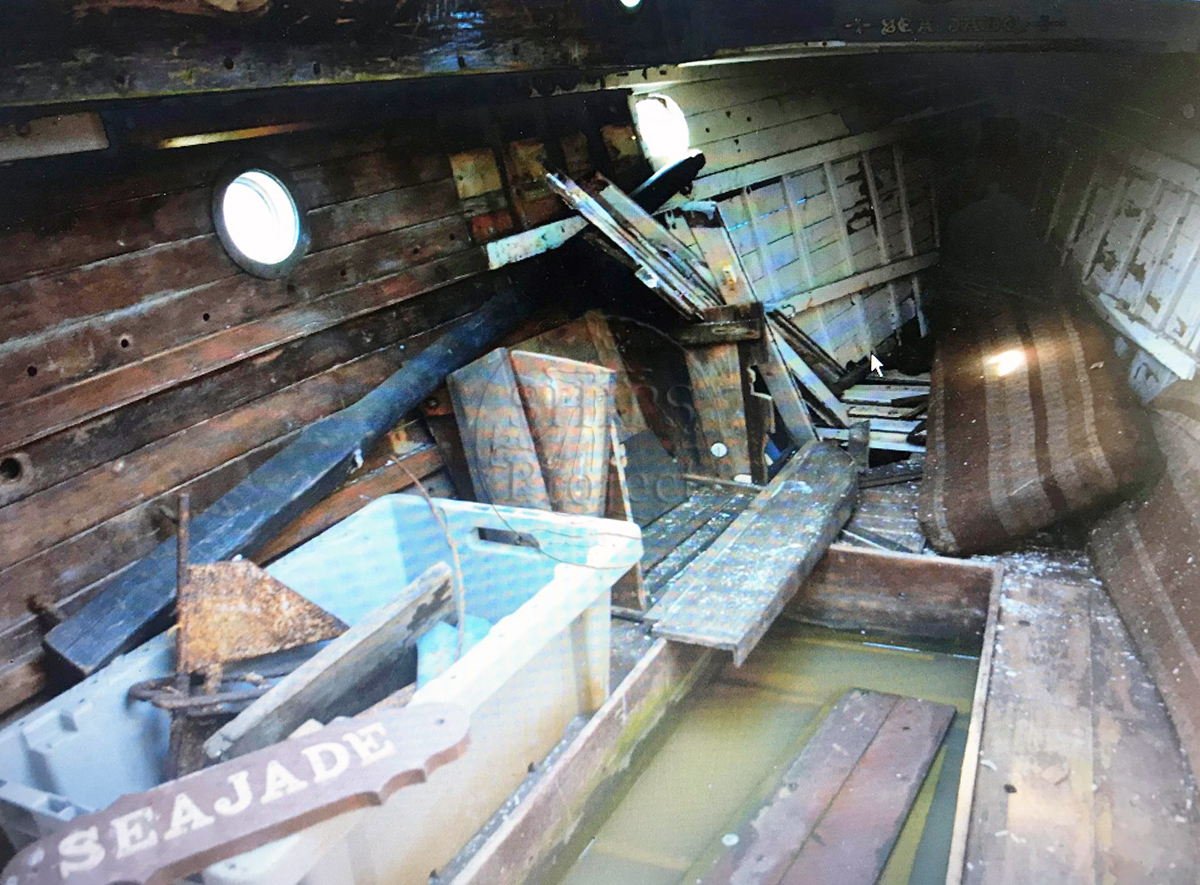 Inside Sea Jade abandoned in Hooe Lake in 2020

It is believed that the steam yacht Norian was broken up in Hooe Lake. Built by John Reid & Co. of Whiteinch, Glasgow, in 1910 for William Chrystal, the 22.8m / 74.7ft long steel yacht had a beam of 4.3m / 14.1ft, was 62 GRT and her official number was 129500. The 18 hp steam engine from Fisher & Company, Paisley, also ran an electrical lighting system on board the ship. Norian was one of the 'Little Ships' in the Dunkirk evacuation (possibly as Elaine) and the Admiralty hired her as a harbour defence vessel during WWII. Renamed by various owners as Elaine then Carraig, she later reverted to her original name.

The yacht was bought by American Mr Chadwell O'Connor in 1966 who intended to take her across the Atlantic to the United States. Still retaining her original steam engine, his attempt to steam her to the U.S. ended in disaster after 22 miles and the yacht was towed back to Sutton Harbour by the Plymouth Lifeboat. The yacht then became a houseboat in Hooe Lake and she was finally broken up at Plymouth in 1976. 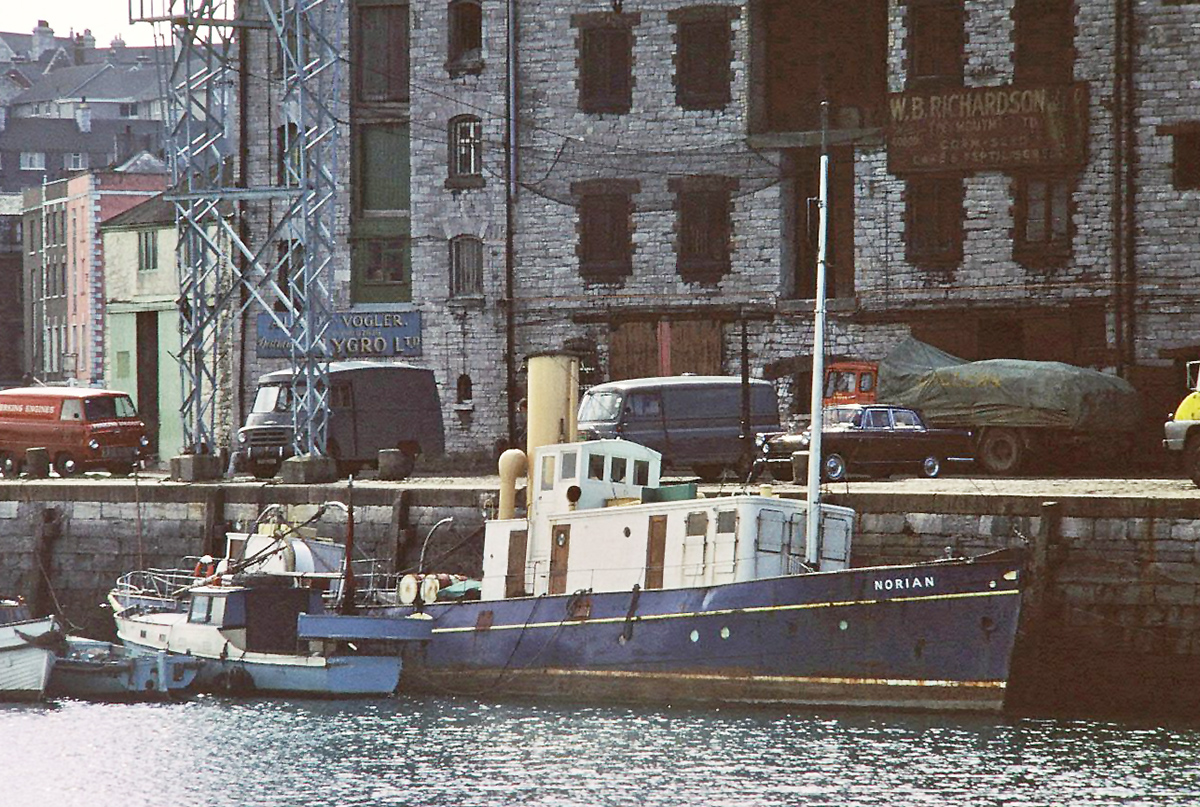 Norian in 1966 in Sutton Harbour, Plymouth 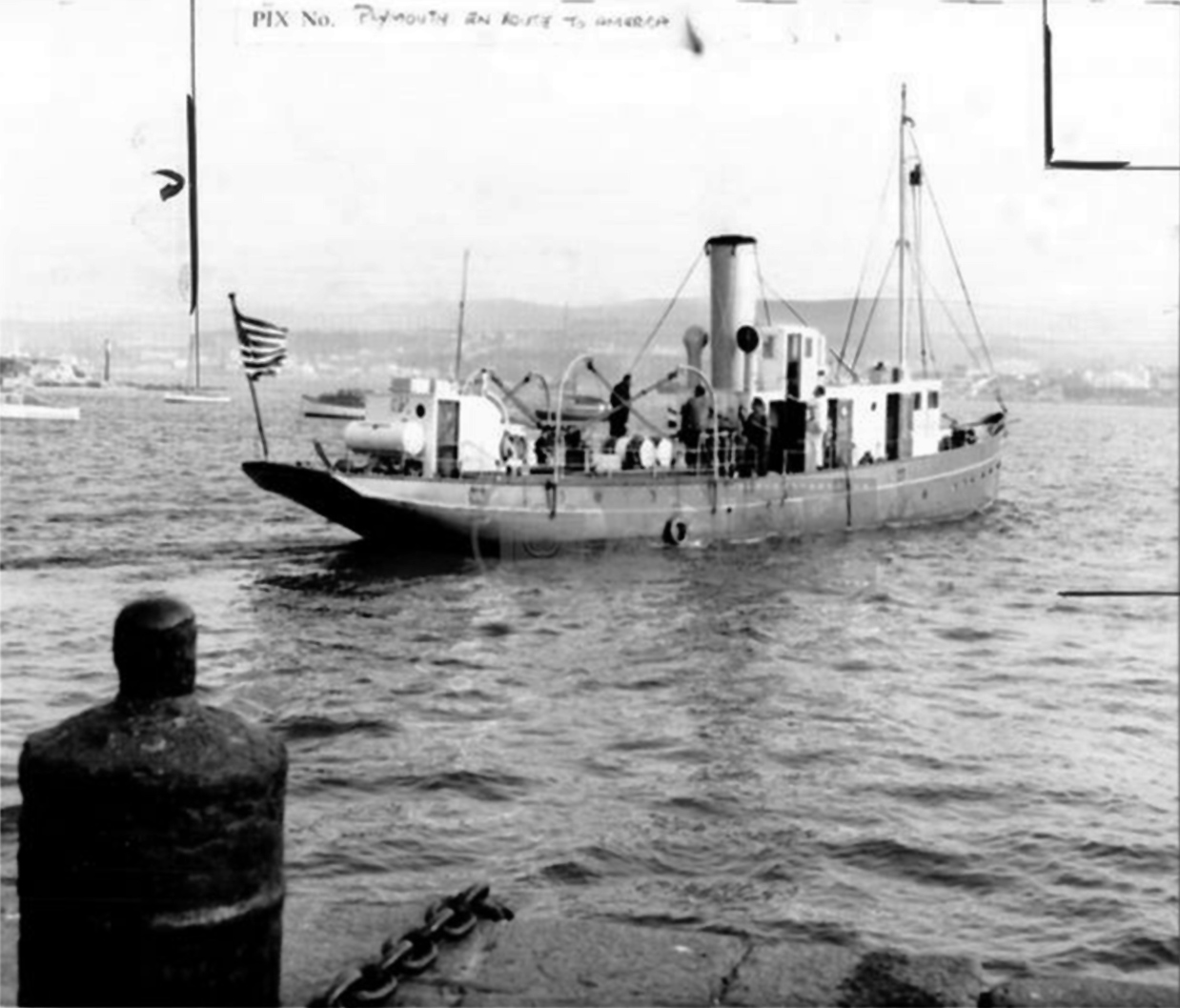 Norian in 1966 leaving Sutton Harbour, Plymouth, heading for the USA

This 68ft British Power Boat Company ex-RAF High Speed Launch (Hants & Dorset) number 2707 was tied up alongside Hexton Quay for many years. We now know that this boat is the HSL abandoned near Polbathic 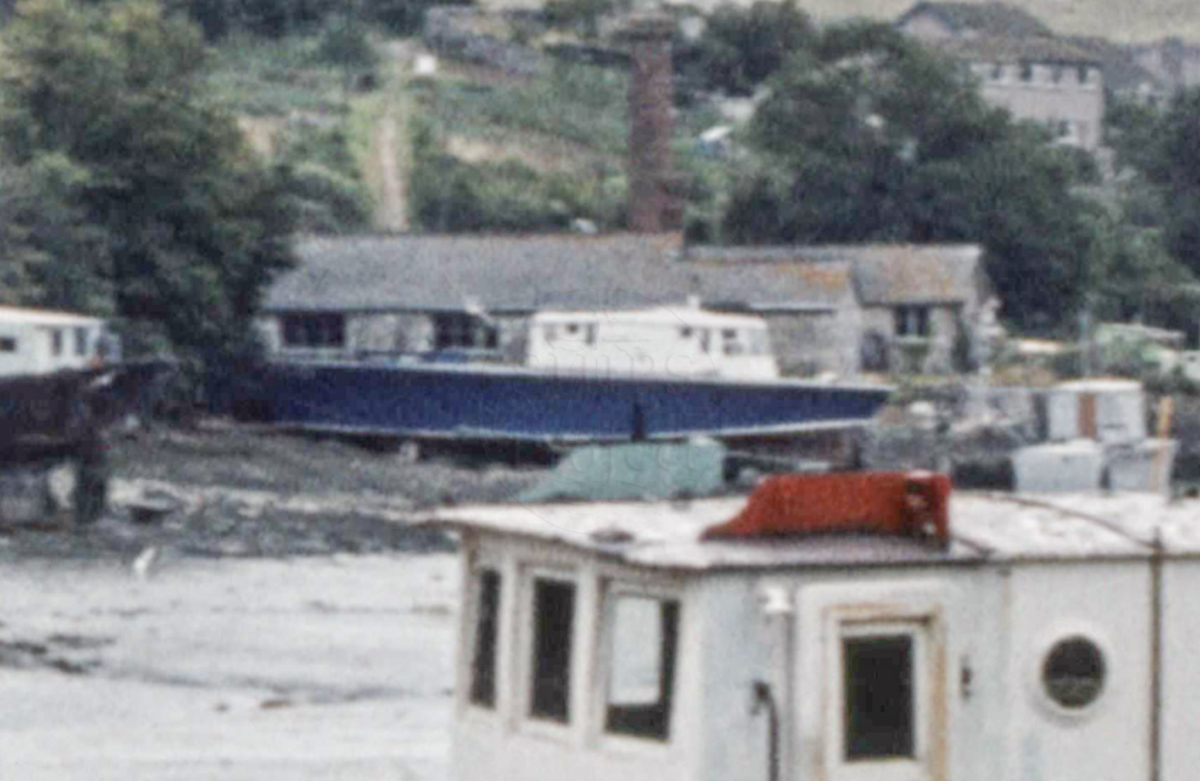 The steam passenger ferry Rapid was built for the Oreston and Turnchapel Steamboat Company in 1889 by Isaac Darton of Turnchapel, at his boatyard at Mount Batten.  Rapid operated as a ferry until 1918 when she was requisitioned by the RAF for war service and was used as the liberty boat for the airmen of RAF Cattewater (Mount Batten), and after WW1 she returned to her ferry duties.  In 1922 she was fitted with a new engine from Sissons & Co. and at the same time she was given the old boiler from the Millbrook ferry Cornubia

, and four years later was refitted on Turnchapel beach with a new keel, stringers and decks.  Further refurbishment in 1946 gave her another keel and she had a new engine in 1950.  In 1954 her machinery was removed and Rapid was offered for sale but was not sold off until 1956 when she was moved to Hooe Lake to become a houseboat, before eventually being destroyed by fire. Nothing now remains of this vessel. 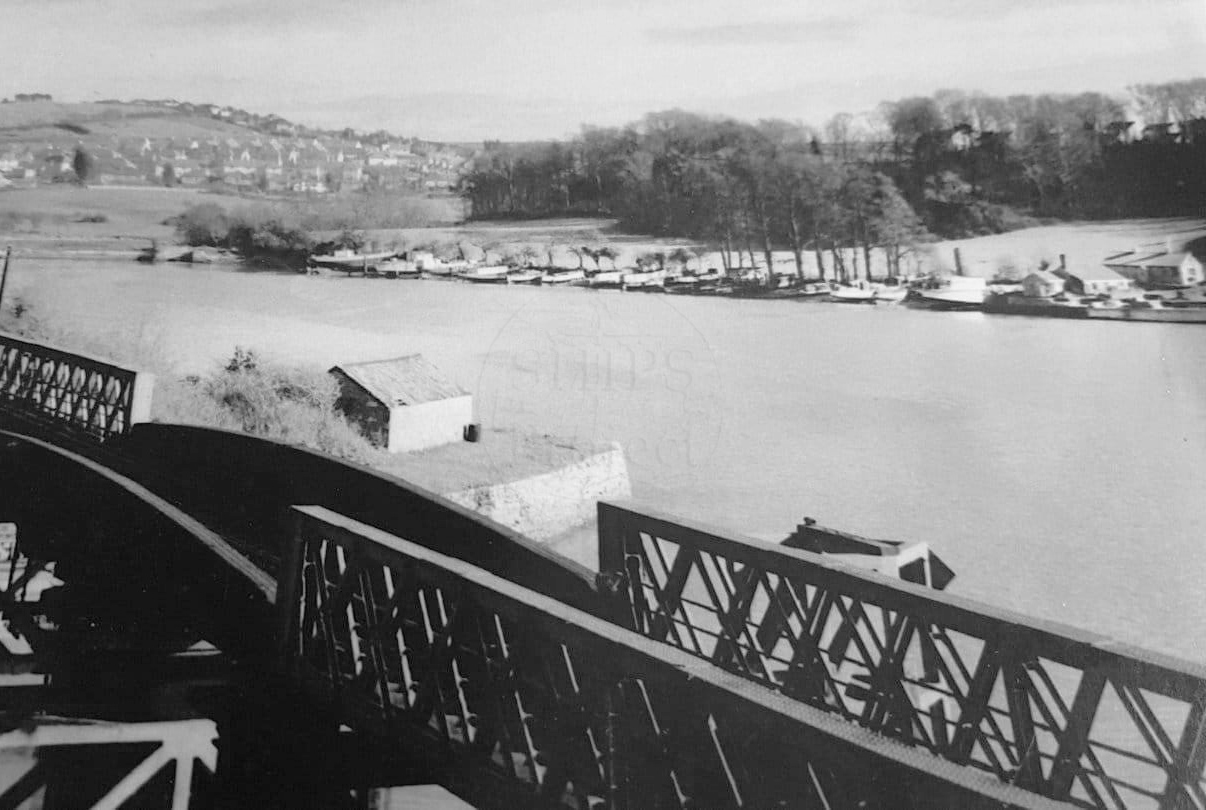 Houseboats in Hooe Lake in the 1960s

The Weymouth registered beamer/scalloper Coriolis (WH 263) was decommissioned in Plymouth and broken up in Hooe Lake, she was built in France in 1964. 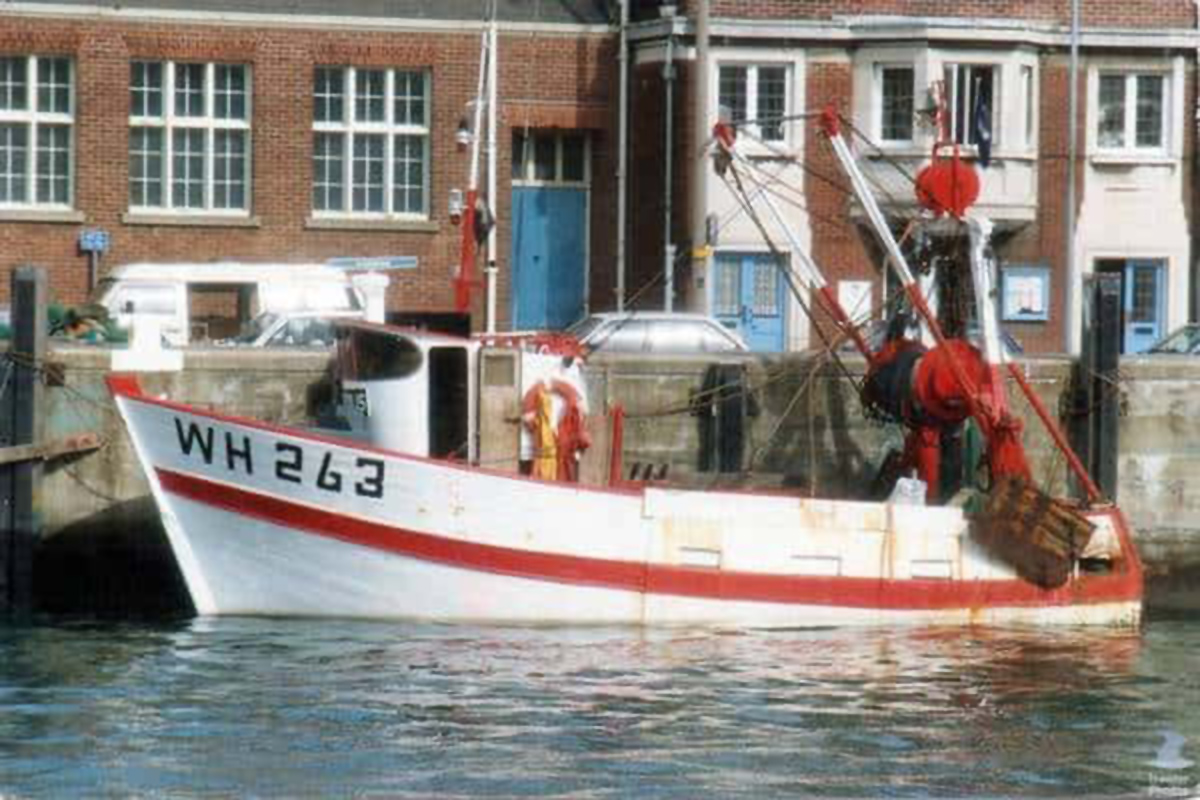 Names of other vessels that were one in Hooe Lake include June Dawn, Lofty, Margaret, Annie, Sally, and the steam passenger ferry Rapid..

From Oreston, take the Lower Saltram road off Plymstock Road then turn right into Kingfisher Way. Follow the road down to the lake and there is a car park at the end. 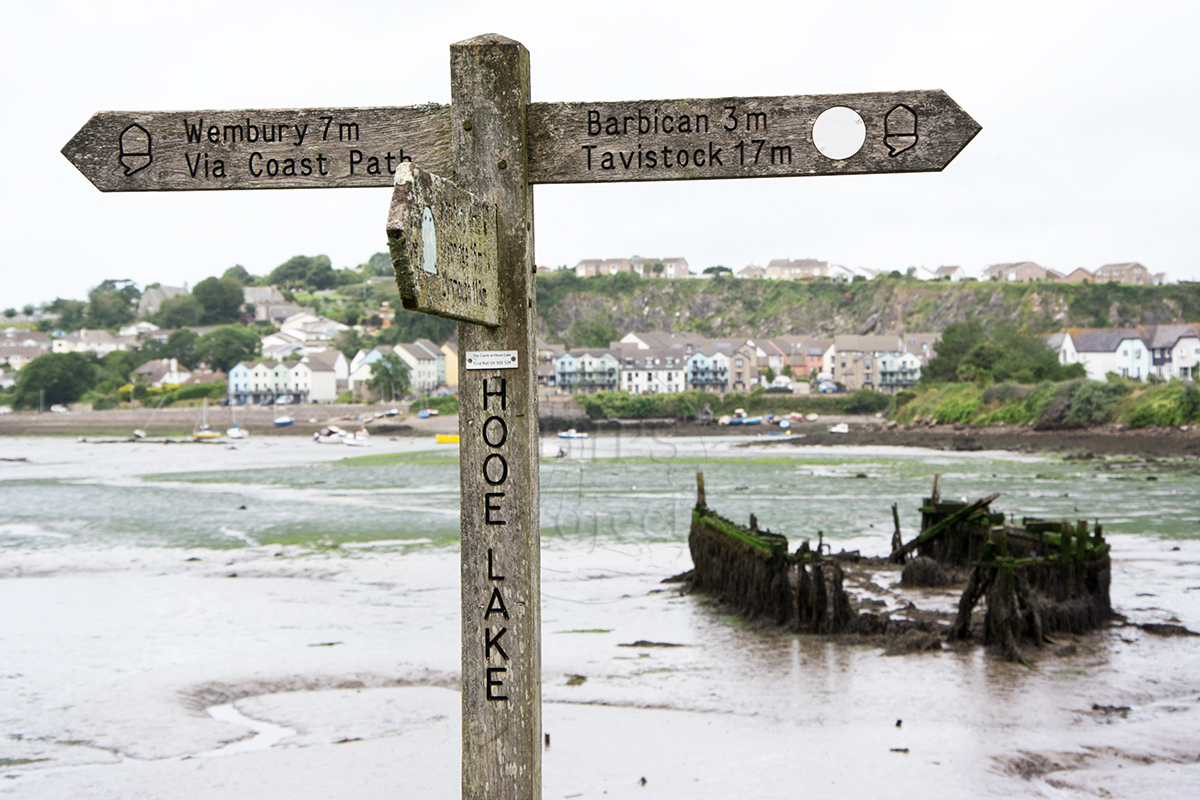