On a Saturday afternoon in March 2004 a crowd of people gathered along the cliffs of Whitsand Bay in Cornwall to see an unusual spectacle.  In the distance the crowd could see the Leander class frigate HMS Scylla stripped of her masts and funnel, anchored in the bay with her bows facing the English Channel.   The Scylla was surrounded by a flotilla of small boats which were kept at a safe distance by a number of official craft.  Five years of planning came to an end just after 3.30pm that day when explosives were set off inside the ship and she disappeared in a puff of smoke and ended up lying upright on the seabed below.

HMS Scylla was a Leander class frigate, third in the series of the successful Type 12 frigate program which included 41 ships built for the Royal Navy and many others constructed for other navies.  By the time the Leander class were designed the Royal Navy needed a general purpose frigate rather than a specialist so the Leanders became a successful Jack of all Trades with 26 ships being built in total.  This latest vessel was the fifth HMS Scylla; the first of her name was an 18 gun brig sloop launched in 1809 and the others being a wooden screw corvette, an Apollo class cruiser and a Dido class light cruiser launched in 1940.

Scylla was the last warship to be built at Devonport dockyard having been launched in August 1968 and commissioned in 1970. By the 1980s the Leander class were in need of modernisation so an extensive refit programme was undertaken.  Scylla was refitted between November 1980 and December 1984 in Devonport.  The 4.5in gun originally fitted to the ship was replaced by Exocet anti-ship missiles, the Seacat missiles were upgraded to a Seawolf missile system and the sonar and helicopter capability was improved. Five of the Leanders were modified in this way including Andromeda (F57), Charybdis (F75), Jupiter (F60), Hermione (F58) and Scylla (F71). It was her upgrade to these weapon systems which prevented Scylla from taking part in the Falklands War where many British casualties resulted from Argentine use of Exocet missiles. 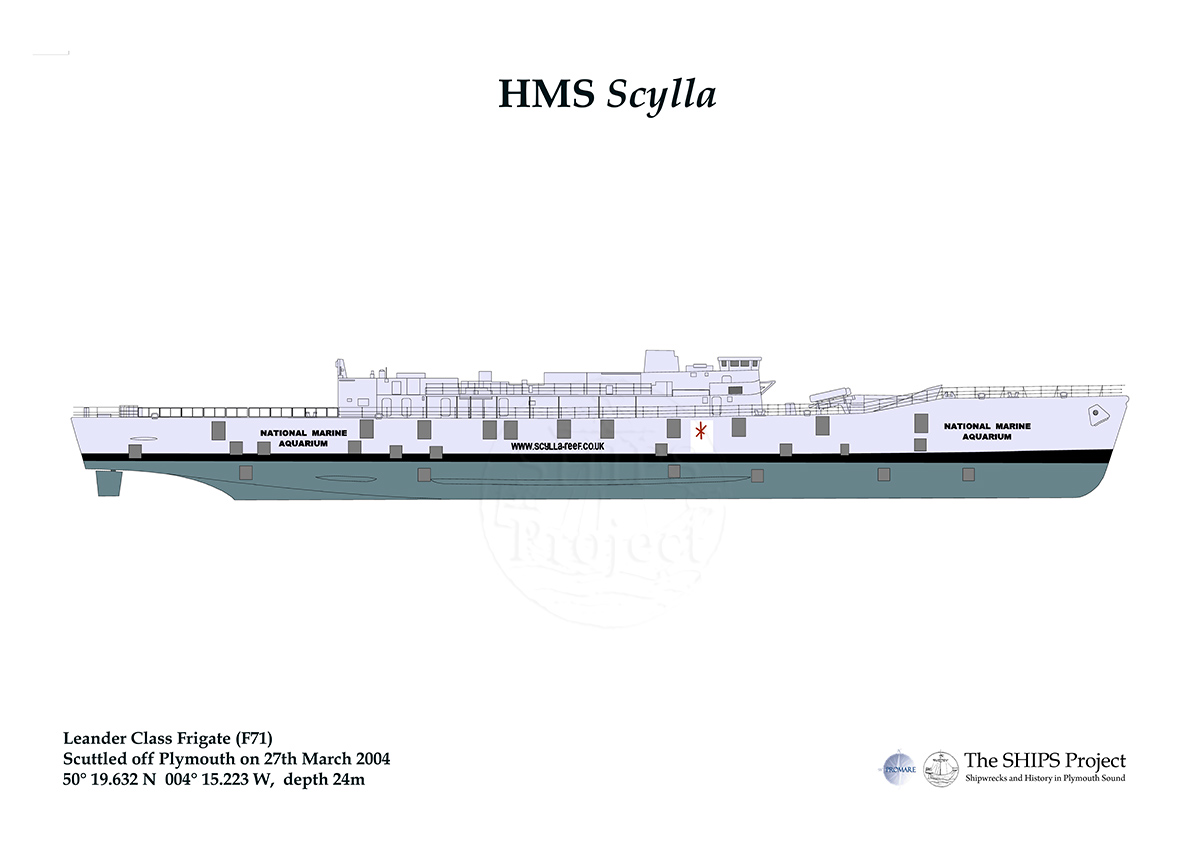 Drawing of the Royla Navy frigate HMS Scylla, click the image for a larger version

Scylla served in the Far East and in January 1973 was involved in a collision with the Torpoint-Devonport Ferry during fog which led to her Captain’s court martial. Scylla is perhaps better remembered for her role during the 1972-1976 Icelandic Cod War as a RN protection vessel. In June 1973 when two British trawlers rammed the Icelandic gunboat Arhakur; Scylla was alleged to have assisting the trawlers. Whatever the truth may be, less than a week later Scylla herself was rammed by the gunboat Aegir. Scylla’s retaliation forced the Aegir to abandon the confrontation. She went on to serve around the globe during the 1970s and 1980s, including playing a part in the Queen’s Silver Jubilee celebrations, before being decommissioned in December 1993 and laid up at Portsmouth.

The idea for sinking a wreck in Whitsand Bay as an artificial reef was dreamed up in 1999 by a group of divers from Plymouth, Nick Murns, John Busby and Nigel Keitley, who formed a group called the Artificial Reef Consortium. The idea was to create a new habitat for marine life on a flat and featureless seabed alongside the wreck of the Liberty ship James Eagan Layne. The project got bogged down in red tape but moved forward in 2003 when the project was taken on by the National Marine Aquarium in Plymouth who secured public funding to prepare and sink the ship. the NMA purchased HMS Scylla for £200,000 in November 2003.

The artificial reef was licensed by Department for Environment, Food and Rural Affairs (Defra) following the completion of an Environmental Impact Assessment which was completed with the help of The SHIPS Project. Scylla returned to Devonport dockyard on the 8th November 2003 to commence a five month programme of preparatory work to be made environmentally sound according to standards laid down by Defra. Any hazards or harmful materials were removed in order to make the ship fit for the seabed and marine life. Once complete, the ship then had all diving hazards removed. Potential snagging hazards were eliminated, doors welded shut or open to ensure diver safety, and additional diver access holes were opened up throughout the four-deck ship. The main mast and funnel were removed as were the sonar domes and propellers.

. The 46 demolition charges fitted to the hull were fired by environmentalist David Bellamy and schoolboy Daniel Green. Daniel was a 12 year old sport diver from Ivybridge who won the chance to sink Scylla in a compenhtition run by the BBC Newsround TV programme, he won by drawing a sea monster and writing about it. The charges blew holes in the hull as a series of controlled explosions and the Scylla sank to the bottom. Among those observing the Scylla's final descent was Captain Mike Booth, the Scylla's last commanding officer.

The wreck has subsequently been monitored by the National Marine Aquarium as she has rapidly become colonised with anemones, hydroids, sea fans and dead men’s fingers in addition to shoals of fish, see Marine Life Study below. As part of the monitoring programme required by Defra, a number of studies of scour formation around the hull have been completed by MSc hydrography students at the University of Plymouth. Scour occurs at the sea floor when sediment is eroded from an area of seabed in response to forcing by waves and currents and the monitoring was done to check that the addition of the wreck did not have an adverse effect on the seabed.

At the time the Scylla was scuttled she was said to be the first artificial reef in Europe, when in fact she was the third after the Glen Strathallan

in 1995 which were also sunk off Plymouth.

Keith Hiscock, Sally Sharrock, James Highfield and Deborah Snelling studied the marine life that took over the Scylla after she had been scuttled and published the results in a paper available below.

The report states that: "After five years, the reef supported a mature steel wreck community. The colonization of the reef showed wide fluctuations in species abundance in the first two years but, by 2006, most species that dominated or characterized the reef after five years had settled. Significant colonization events included settlement of barnacles, tubeworms and hydroids within a month and remarkably high settlements of the sea urchin Psammechinus miliaris and the queen scallop Aequipecten opercularis in the first year together with starfish Asterias rubens, solitary sea squ'irts and ephemeral algae. The plumose anemone Metridium senile, a characteristic species of wrecks, arrived in late summer 2004 but the widely distributed dead man’s fingers Alcyonium digitatum was not observed until spring 2005. Wrasse were slow to colonize the reef but were established in small numbers by the end of 2007. Sea fans, Eunicella verrucosa, were first observed in August 2007. The species count for the reef stood at 263 taxa by the end of March 2009. The inside of the reef remained poorly colonized even after five years. Areas coated with tributyltin (TBT) antifouling paint only had colonization where the paint had flaked-off or on non-toxic paint markings, but with some indication that colonization may be occurring by a very few species especially near to non-TBT areas. Many species characteristic of natural reefs had not settled and neither do they occur on older wrecks including branching axinellid sponges, some cushion sponges and the yellow cluster anemone Parazoanthus axinellae. The artificial reef developed a community that was distinctly different to nearby natural rock reefs and such artificial structures should not be considered as a replacement for damaged or destroyed natural habitats."

Virtual Scylla is a project by the Human Interface Techniologies (HIT) Team at the University of Birmingham, which aimed to show how state-of-the-art developments in VR could deliver an environmental research and awareness tool accessible to a wide range of possible users, from marine biologists and engineers to schoolchildren and members of the general public. The team developed a 3D model of the Scylla which could be controlled in in real time by piloting a virtual remotely operated vehicle (ROV) using a Microsoft Xbox gamepad or other interactive controller. To add context to the experience, a geographically accurate model of the Whitsand Bay coastline, from Rame Head to Portwrinkle was also constructed using digital terrain map data and aerial photography.

To endow the subsea wreck model with an educationally-relevant experience, they developed software techniques in artificial life (or alife) – the scientific study and simulation of the behaviour of biological organisms and systems – to investigate and predict how natural environments survive, reproduce, colonise and evolve and may be affected by environmental changes brought about by climate change, extreme weather events or pollution. In 2009, the Virtual Scylla alife and wreck “fly-through” demonstrators were presented to schoolchildren and specialist adult audiences at the National Marine Aquarium.

She lies on a gently sloping area of relatively featureless sandy seabed, with her bows to the south-west, listing to her starboard side, at between 21.2m CD at the bow and 19.9m CD at the stern. It is possible to access the superstructure and significant parts of the interior – this was further facilitated through the removal of sections of the hull. Each space has two openings for access and/or egress. Where spaces were deemed unsafe they have been physically blocked off and entrances closed and locked, such as the engine room. Divers have been given access to the superstructure, all of decks 1 and 2 and partial access to decks 3 and 4. Diving highlights include the captain's cabin, the bridge, galley, mess decks and living accommodation, operations room and the engine room. 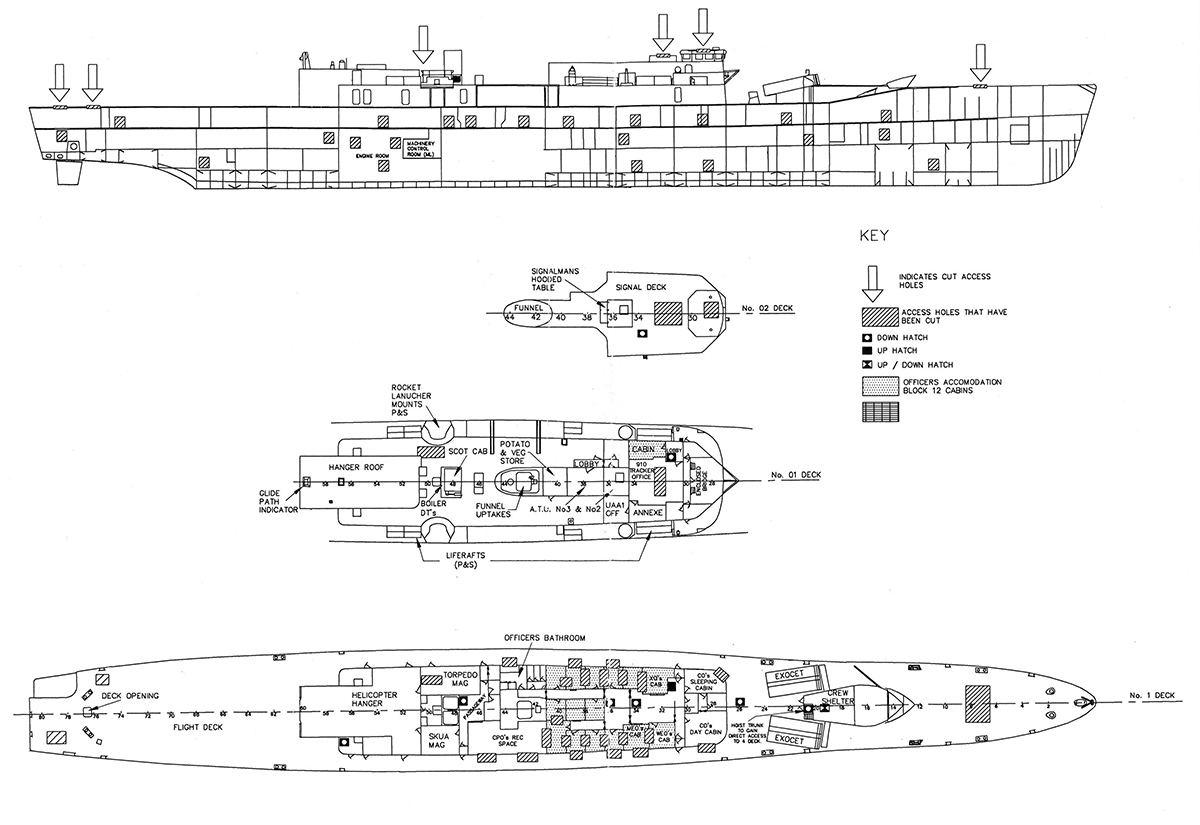 Site plan of HMS Scylla, click the image for a larger version [NMA]

March 2017 NMA said that the interior of the wreck was now unsafe for diving because of deterioration to the structure caused by adverse winter weather and dissimilar metals used in the original construction.

Many interior walls have now collapsed, as has much of the helicopter hanger due to having been hit by a mooring block, so Scylla’s interior is now much more like other wrecks. Scylla is a popular dive site and is visited by many hundreds of divers each year. Like all shipwrecks, Scylla contains silt which can prevent divers recovering exit points so, despite all the preparation that went into her preparation for sinking as a diving attraction, she should still be dived with the respect she deserves.

Nearby wrecks include the James Eagan Layne

and the steam collier Rosehill

Our friends at Deep Impressions have created a beautiful fine art print of HMS Scylla sunk of the bottom of Whitsand Bay. You can order your own copy of the print here, size 465 mm x 386 mm 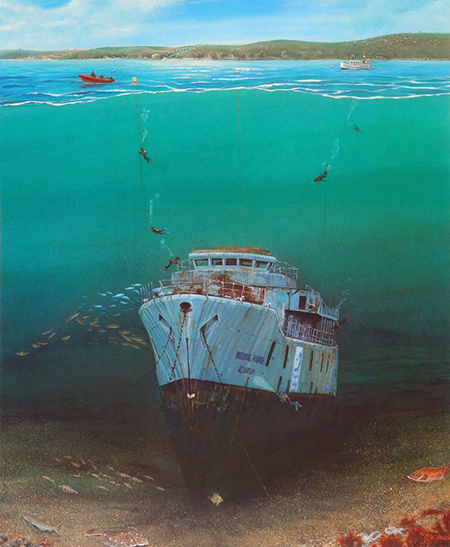 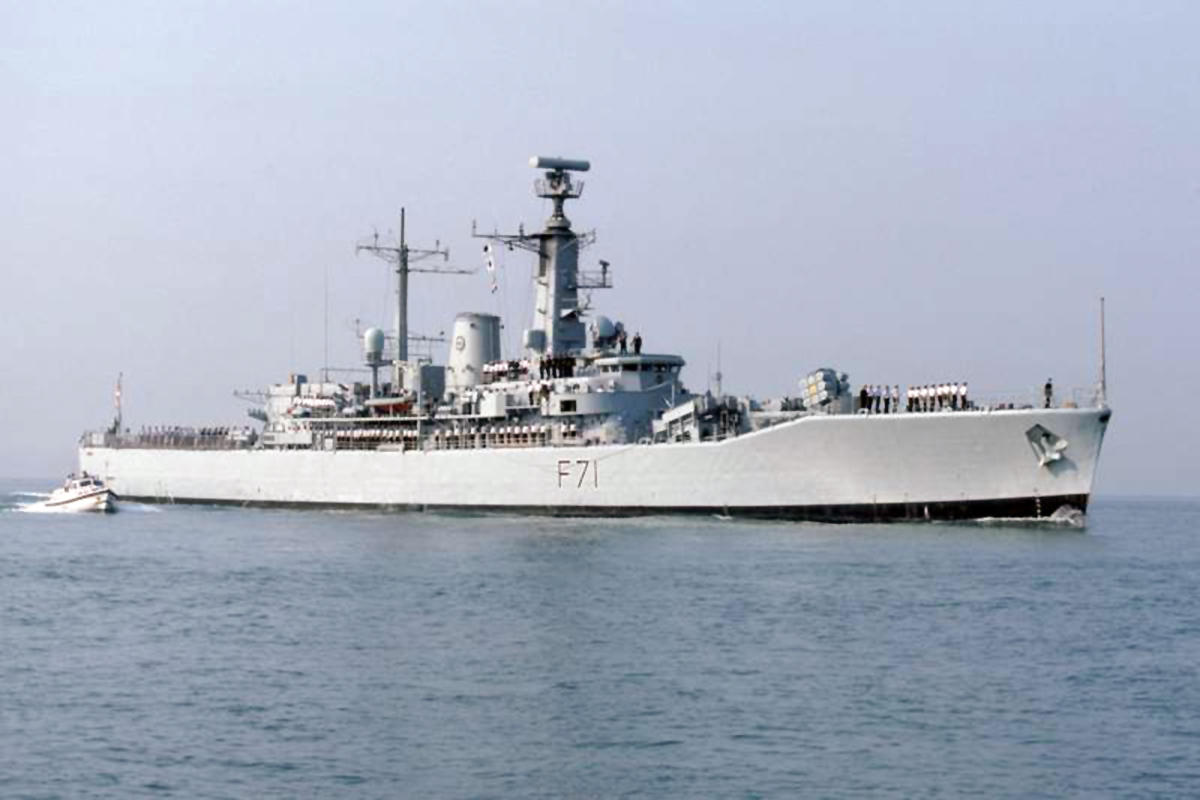 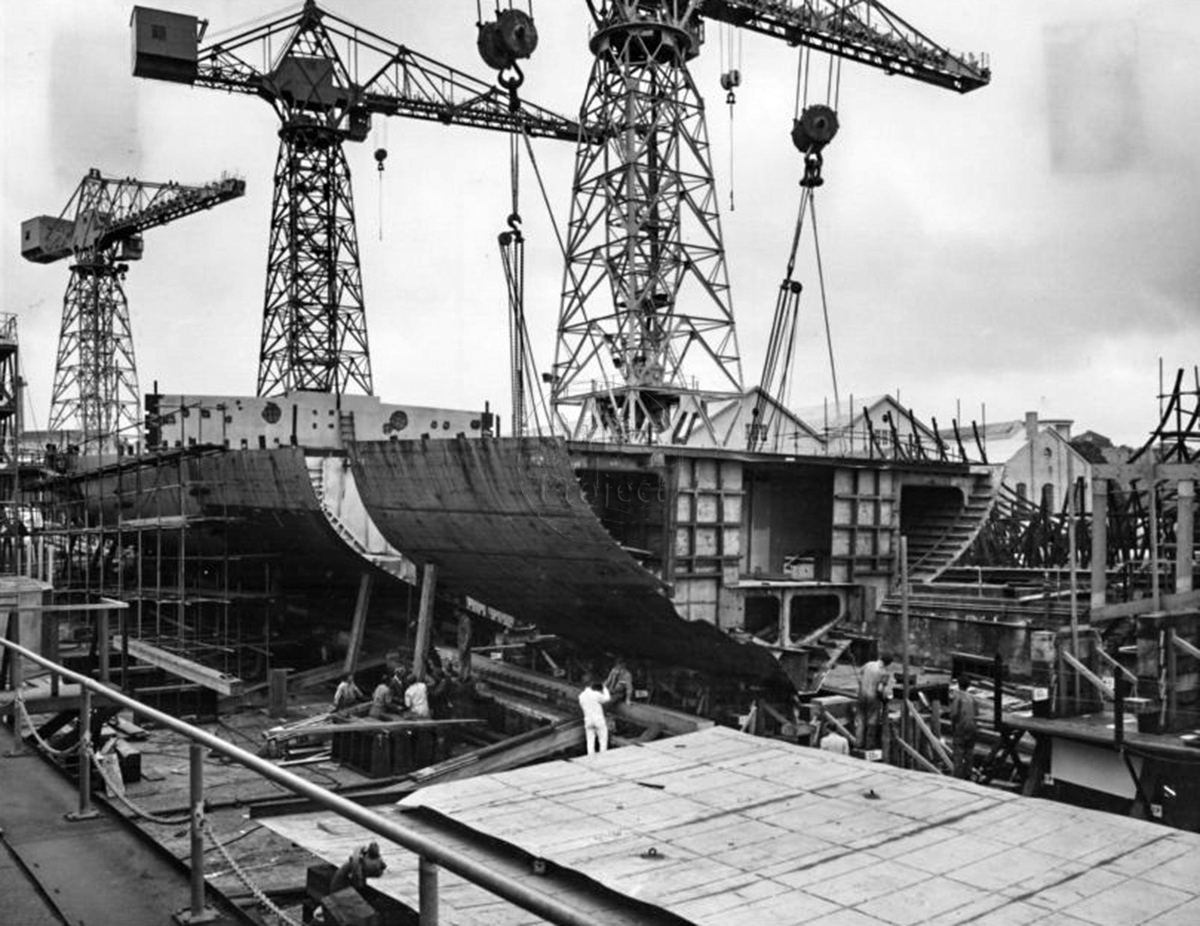 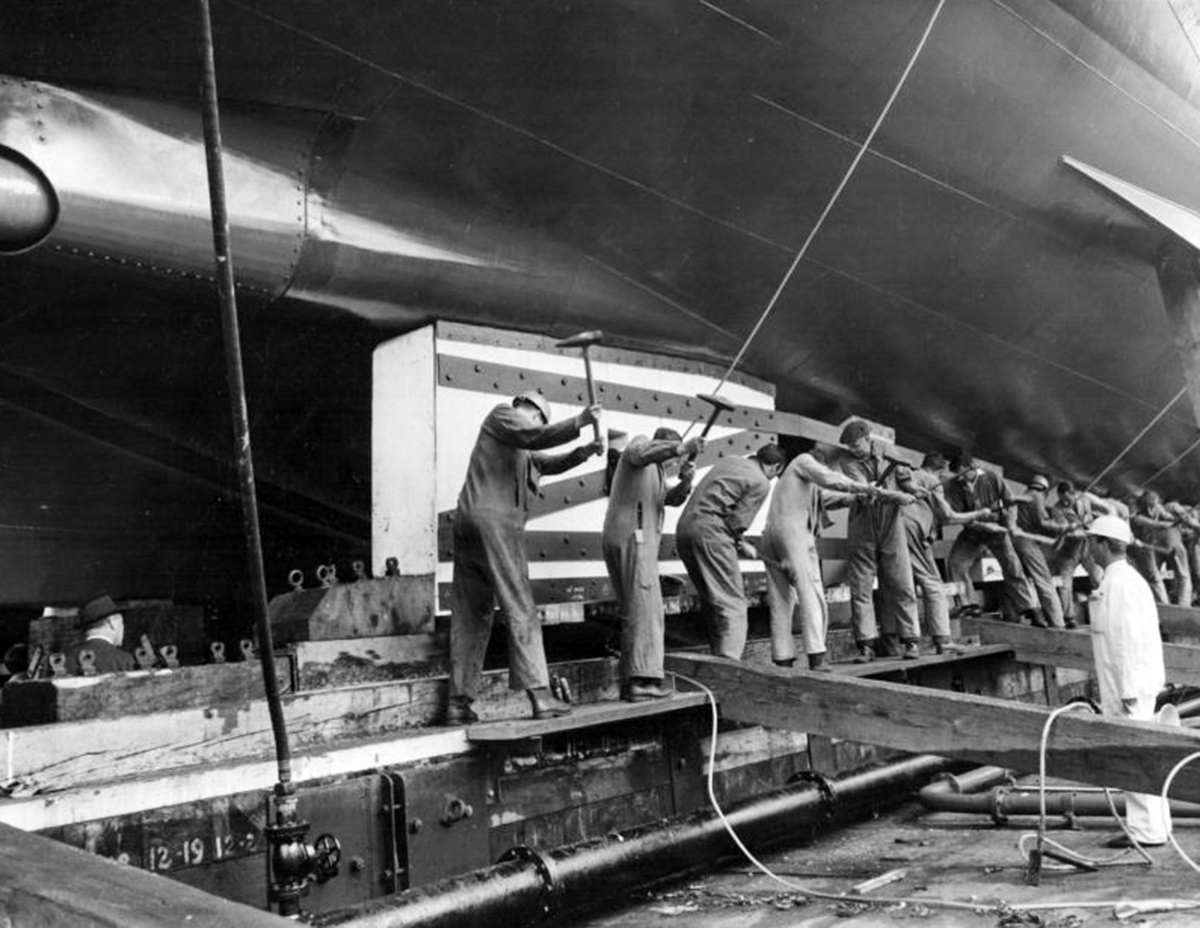 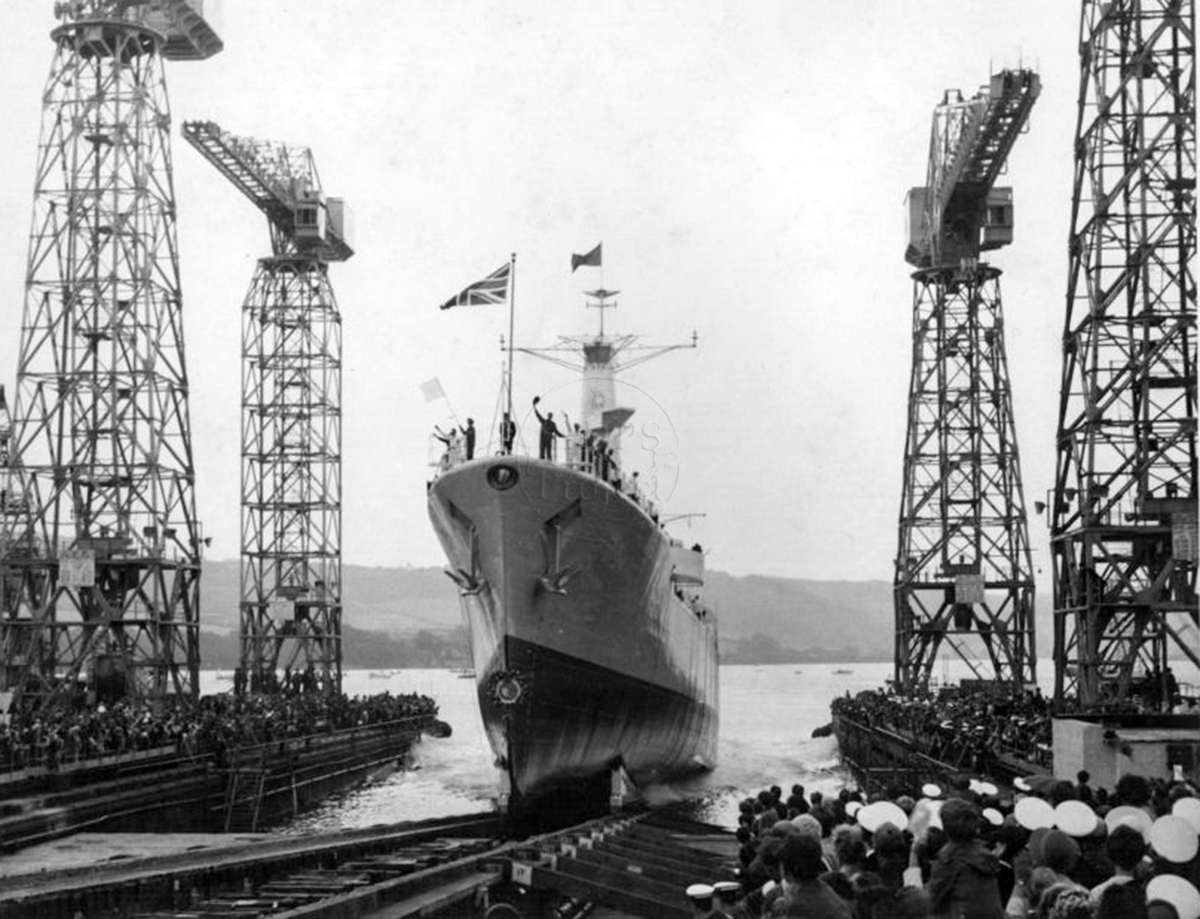 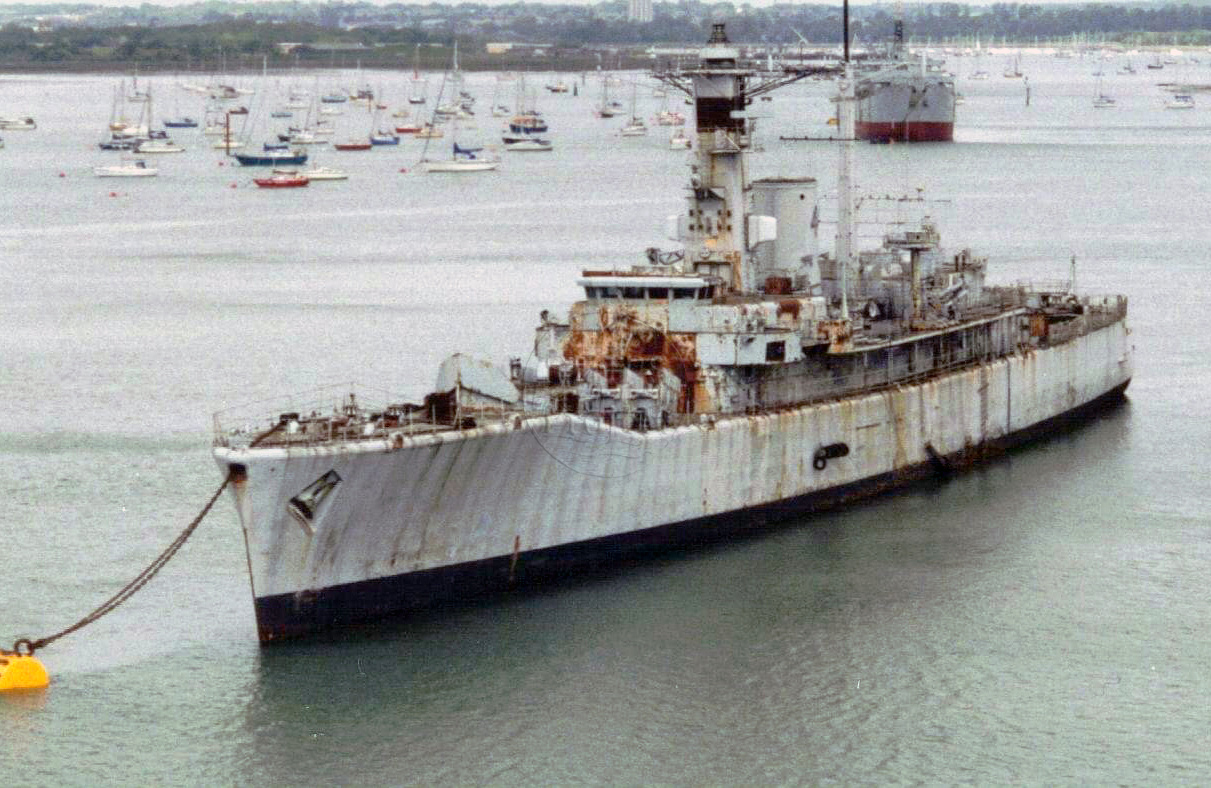 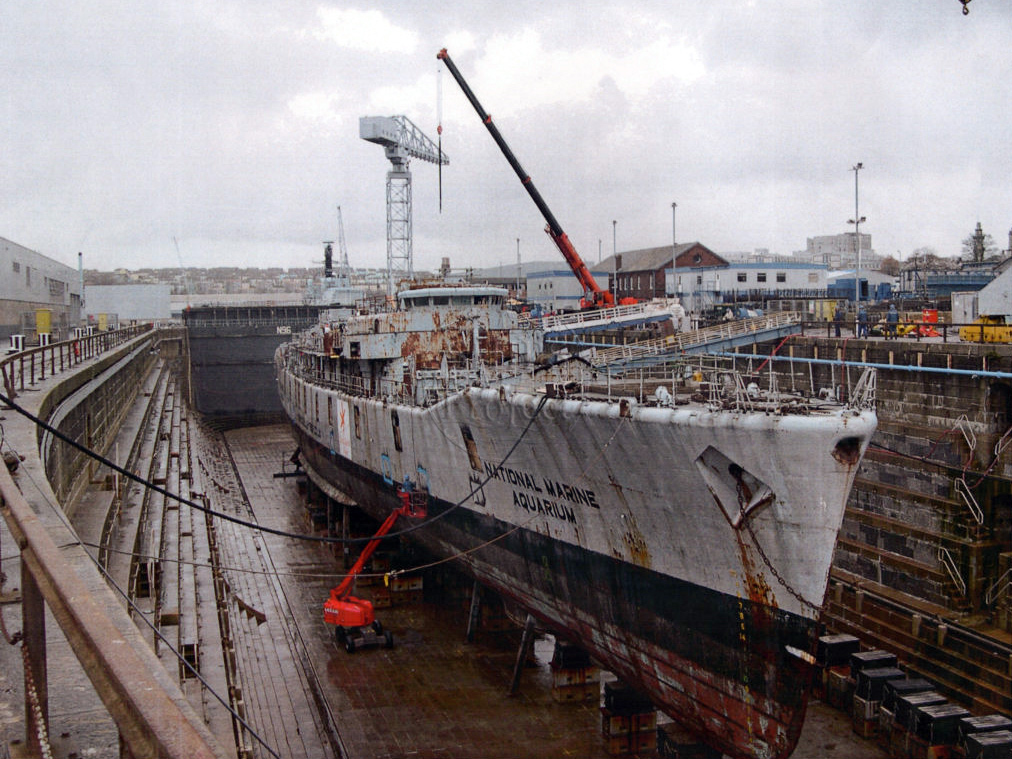 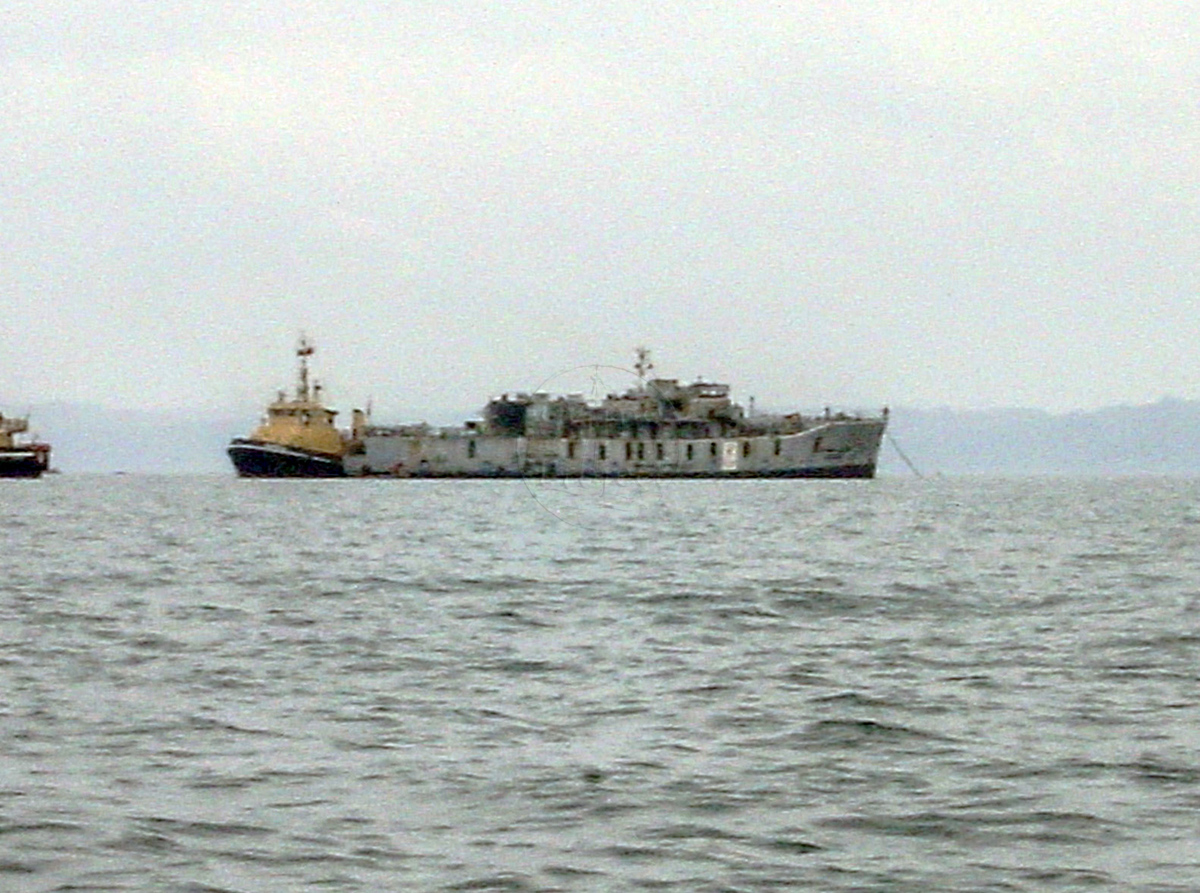 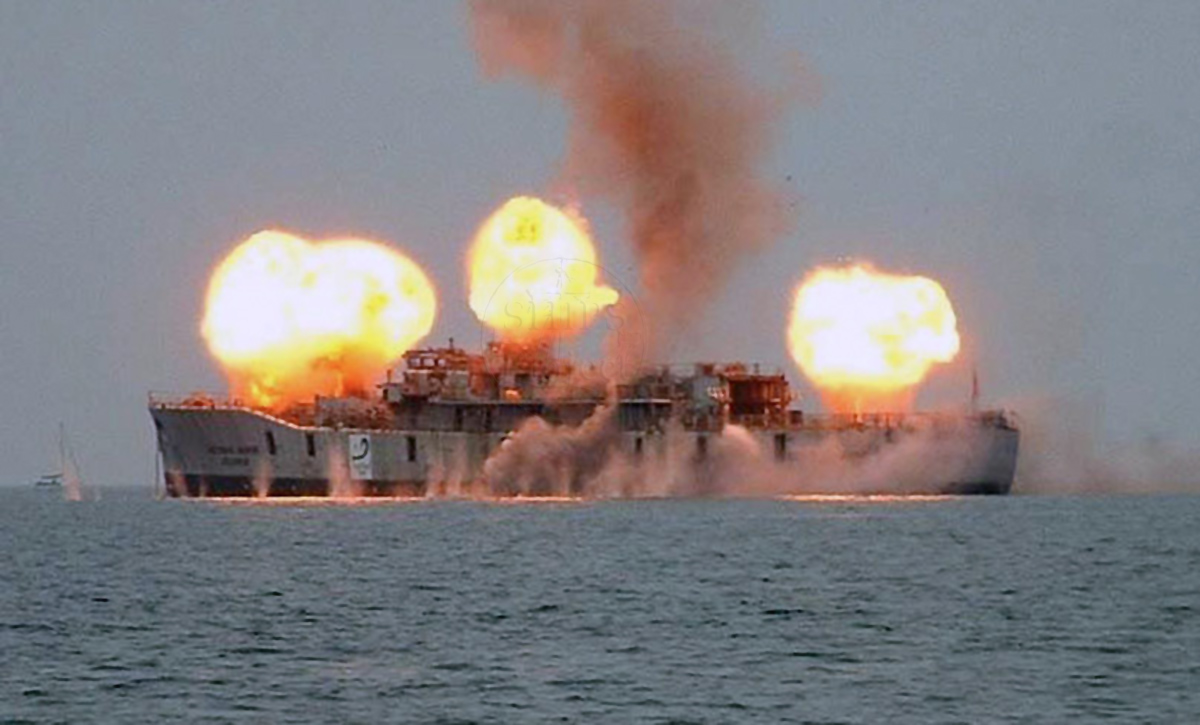 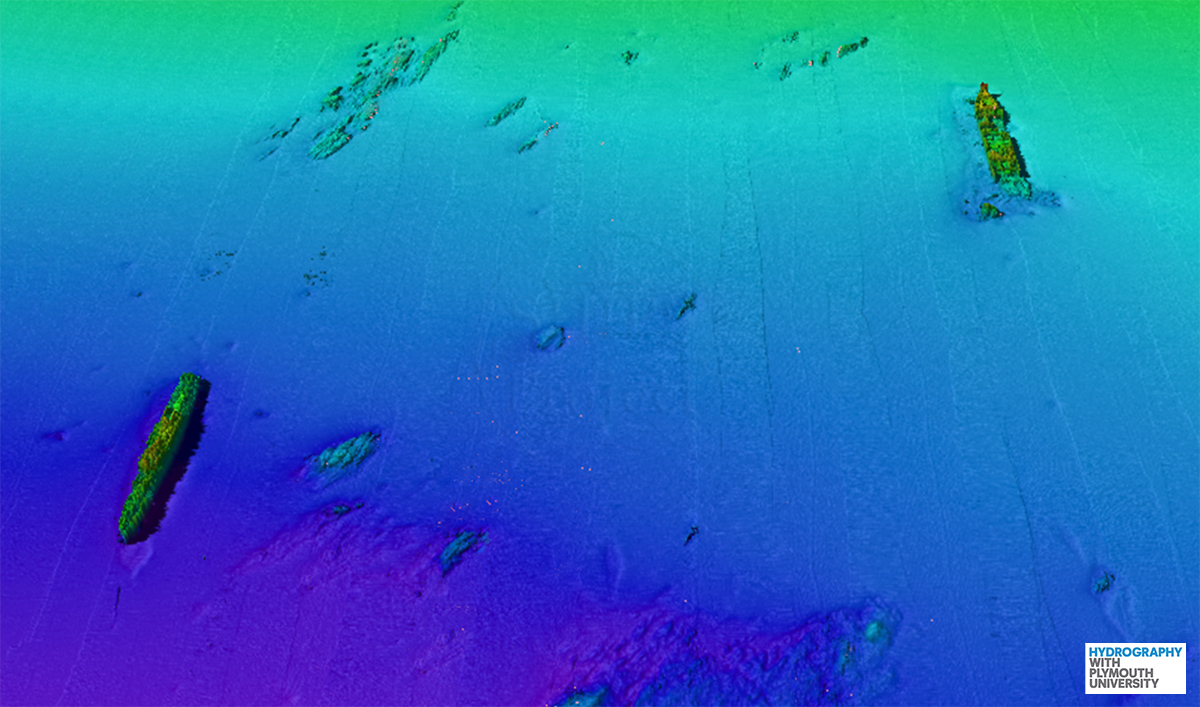