A pinnace from the French dreadnaught battleship (cuirassé) Paris on the mud in Sand Acre Bay on the Lynher River, Cornwall.

The battleship Paris was one of the first four dreadnaught battleships built for the French Navy, launched in 1912 before the start of WW1. At the beginning of WWII the Paris and her sister ship Courbet were being used as training ships but at the start of the German invasion of France the Paris was moved to Cherbourg to be rearmed for war. On 6th June 1940 the Paris was moved to Le Havre to assist with defending the town but she was severely damaged when she was hit by a German bomb just five days later, so despite the huge leaks in her hull the Paris withdrew from the battlefront and limped to Brest via Cherbourg for repairs. The advance of the German army was swift and the Paris had to evacuate, she took on board 2.800 soldiers and left the port on 18 June 1940 and headed towards the safety of Plymouth in England.

The Paris escaped to Plymouth along with the huge submarine Surcouf, the transport ship Poulmic, the merchant vessel turned patrol ship Medoc plus many other French cruisers and destroyers. Admiral Darlan, Minister for the Navy in the Vichy French government, sent an order on June 24th to all French vessels in British ports telling them to return to France. The ships were then to remain in French ports with French crews with secret plans for scuttling should any foreign power attempt to seize them. However, Churchill was concerned that under pressure from the Germans the Vichy government would allow their ships to be used against the Allies. So on the night of 3rd July 1940 the French ships in British ports were boarded and taken over by the Royal Navy as part of Operation Catapult. Three British and one French sailor were killed and other seamen wounded during the taking of the submarine Surcouf. The captured battleship Paris became a depot ship for the Royal Navy and a floating barracks for the Polish Navy for the rest of the war.

Some weeks after the Paris was taken over, her steam pinnace was lowered into the water and taken under her own steam to Sand Acre Bay where it was anchored and left. The action looks unauthorised as it seems not to have been recorded and the location for mooring the vessel is unusual, were the pinnace to be used in service it would have remained in the Dockyard. The Antony-Forder ferryman, Jack Crosley, saw the pinnace and tried to buy her from the Dockyard authorities but without success. The pinnace was then vandalised with 60lbs of copper tubing and wire having been removed from her boiler, the police apprehended the culprits but failed to find the owner of the pinnace as the Dockyard denied responsibility. The vessel was soon ransacked and everything of value was removed leaving just the steel hull on a mooring, eventually the hull broached and the pinnace settled into the mud, flooding each high tide.

The French battleship Paris left Plymouth without her pinnace. After the end of WWII the Paris was towed to Brest to continue to be used as a depot ship then was sold for scrap in December 1955 and broken up six months later.

The Medoc who came over from France with the Paris was given to the Polish Navy who had men but no ships, but reverted to Royal Navy command in October with a largely British crew with some Polish nationals. A month later the Medoc was torpedoed and sunk off Plymouth in November 1940, you can read the full story of the Medoc here

. The Poulmic was handed over to the Free French Naval Forces (Les Forces Navales Francaises Libres, FNFL) on 11 August 1940. On the 7th November 1940 while on mine watching duty the Poulmic set of an acoustic mine and sank south of Plymouth Breakwater, 11 crew were lost and 7 rescued at which time Vibert was severely wounded. This ship was the first ship loss for the FNFL and you can read the full story of the Poulmic here

The steam pinnace from the Paris is mentioned in Langley and Small's book Lost Ships of the West Country and was photographed by both John Cotton and Peter Mitchell. The remains of the pinnace were investigated in 2017 by The SHIPS Project with David J.B. Smith and Andy Holcombe from the Plymouth at War

team who brought their drone along to get some aerial footage. The Maritime Archaeology Trust created a 3D model of the pinnace from drone footage in 2017 which you can see here

The remains of the steel vessel can be seen on the mud with her bows facing south out of the bay.

From Saltash, take Wearde Road south to Churchtown Farm where the road bears hard left. Follow the footpath south-west, cross over the railway line at the bridge then take the footpath on the left leading down to the beach. Walk along the beach eastwards and the hulks can be seen on the foreshore at the eastern end. The pinnace is visible from the shoreline at most states of the tide but can only be accessed at low spring tide.

Launching the French battleship Paris in 1912 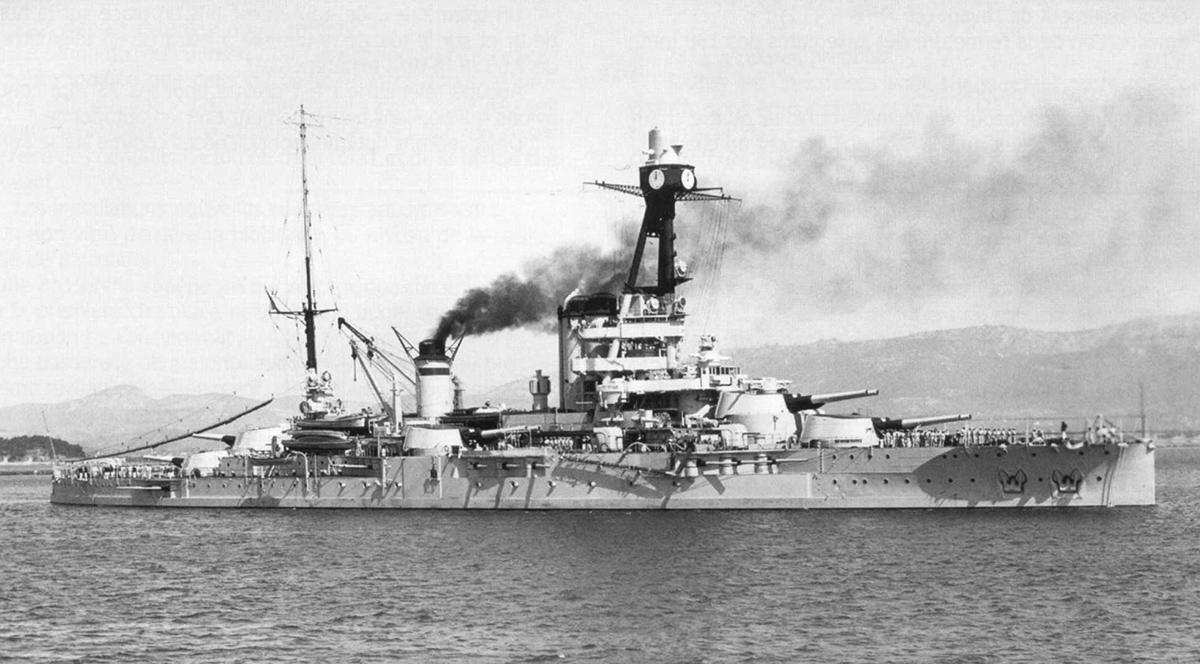 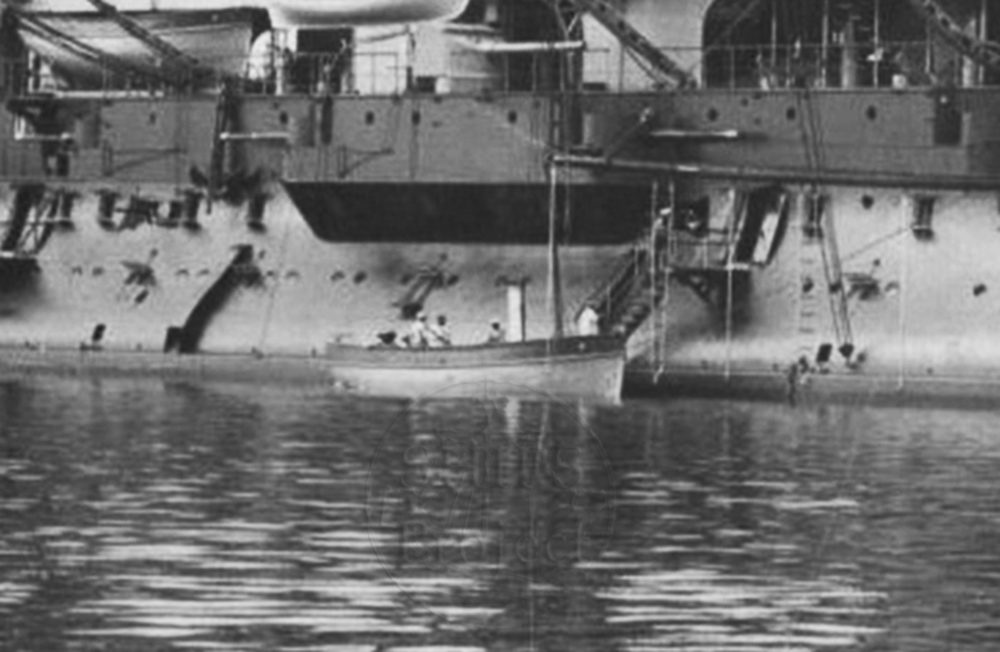 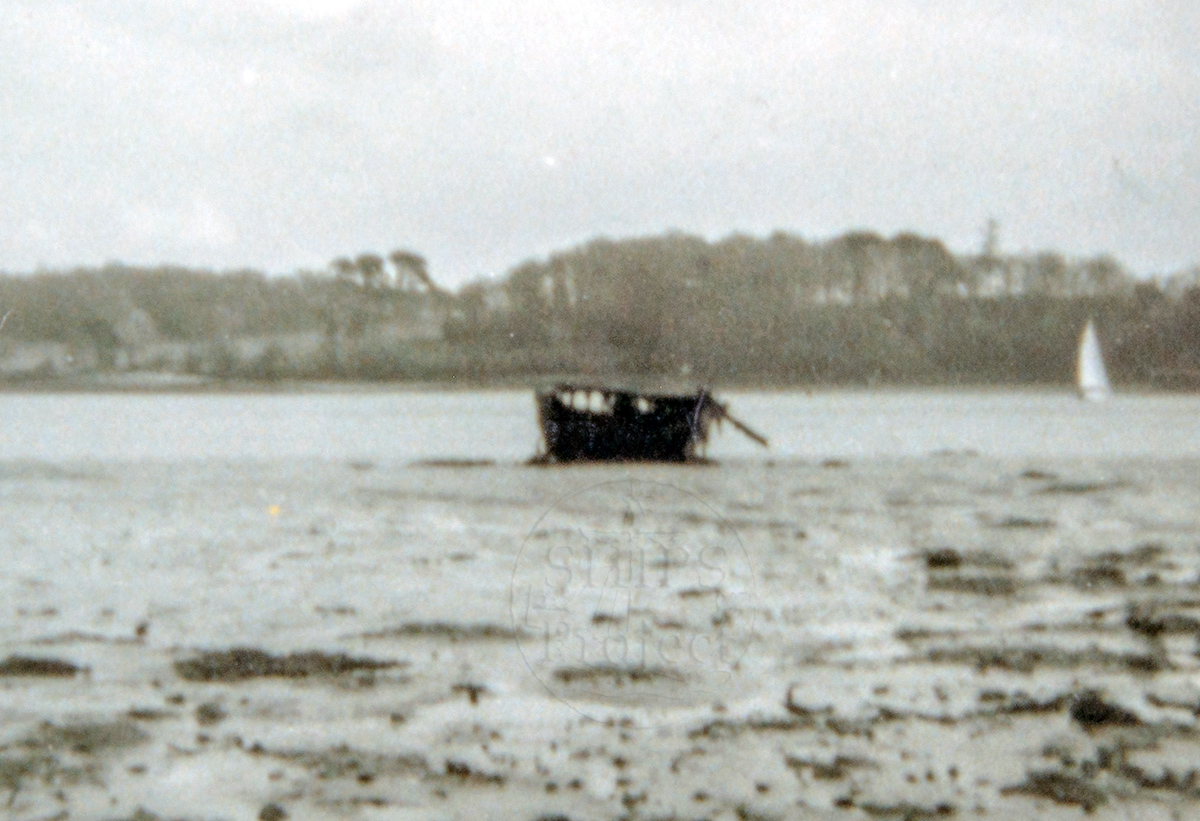 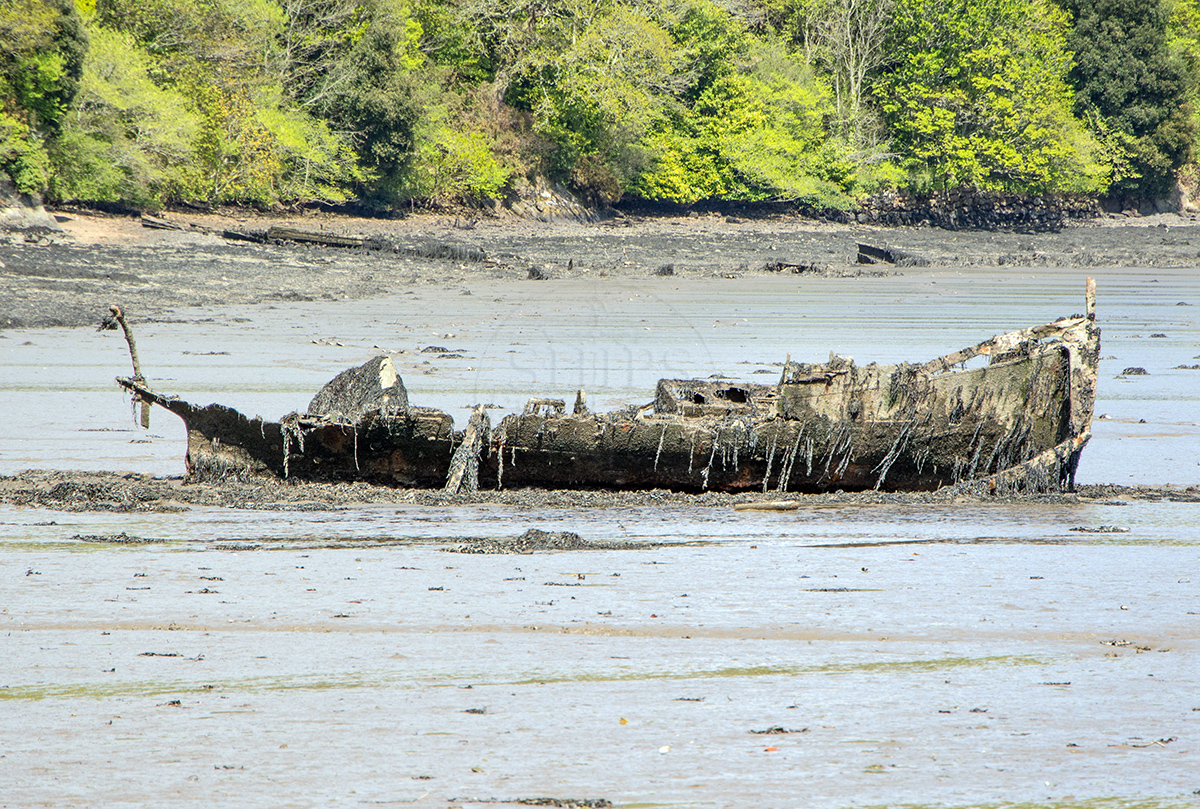 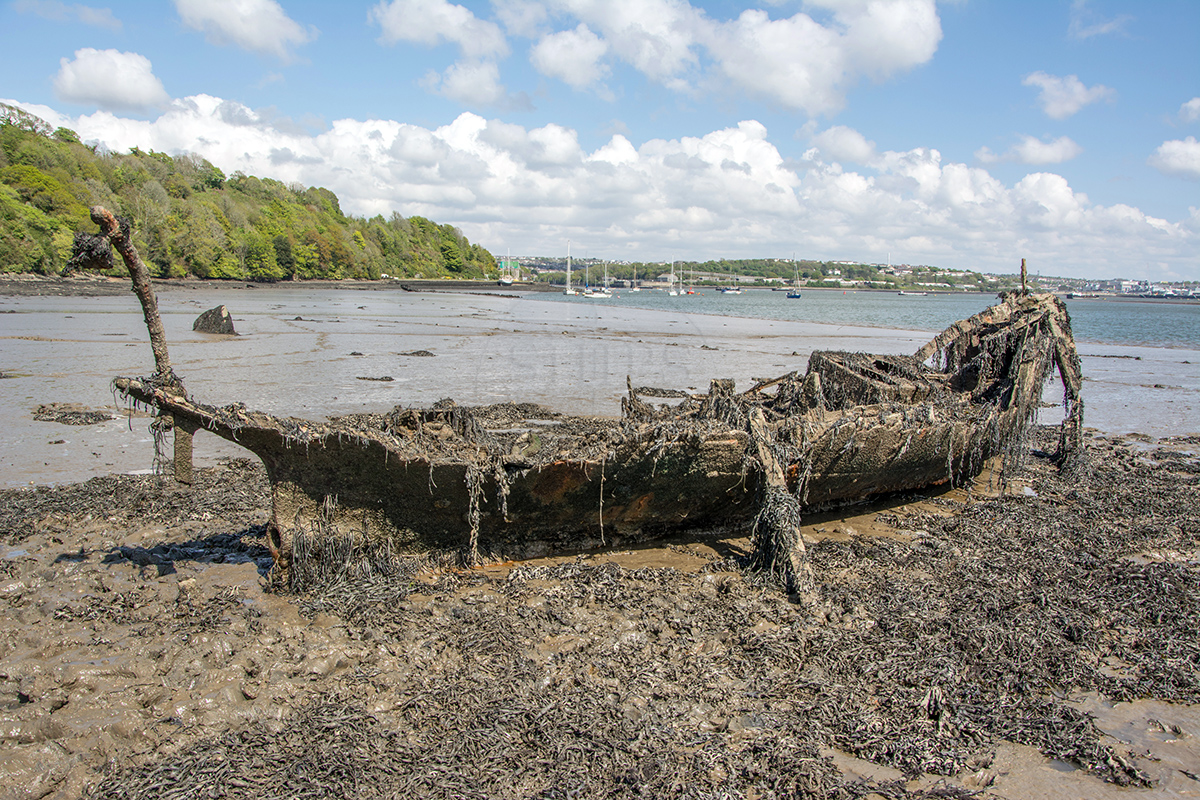 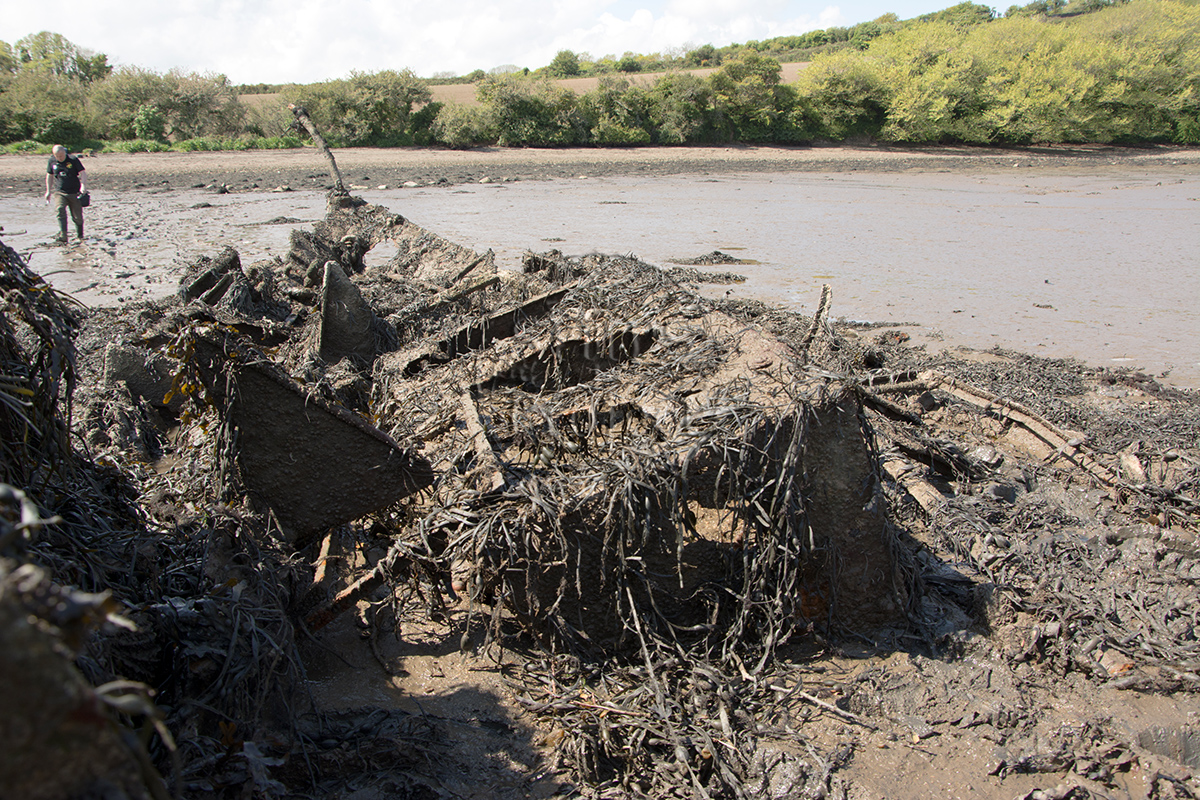 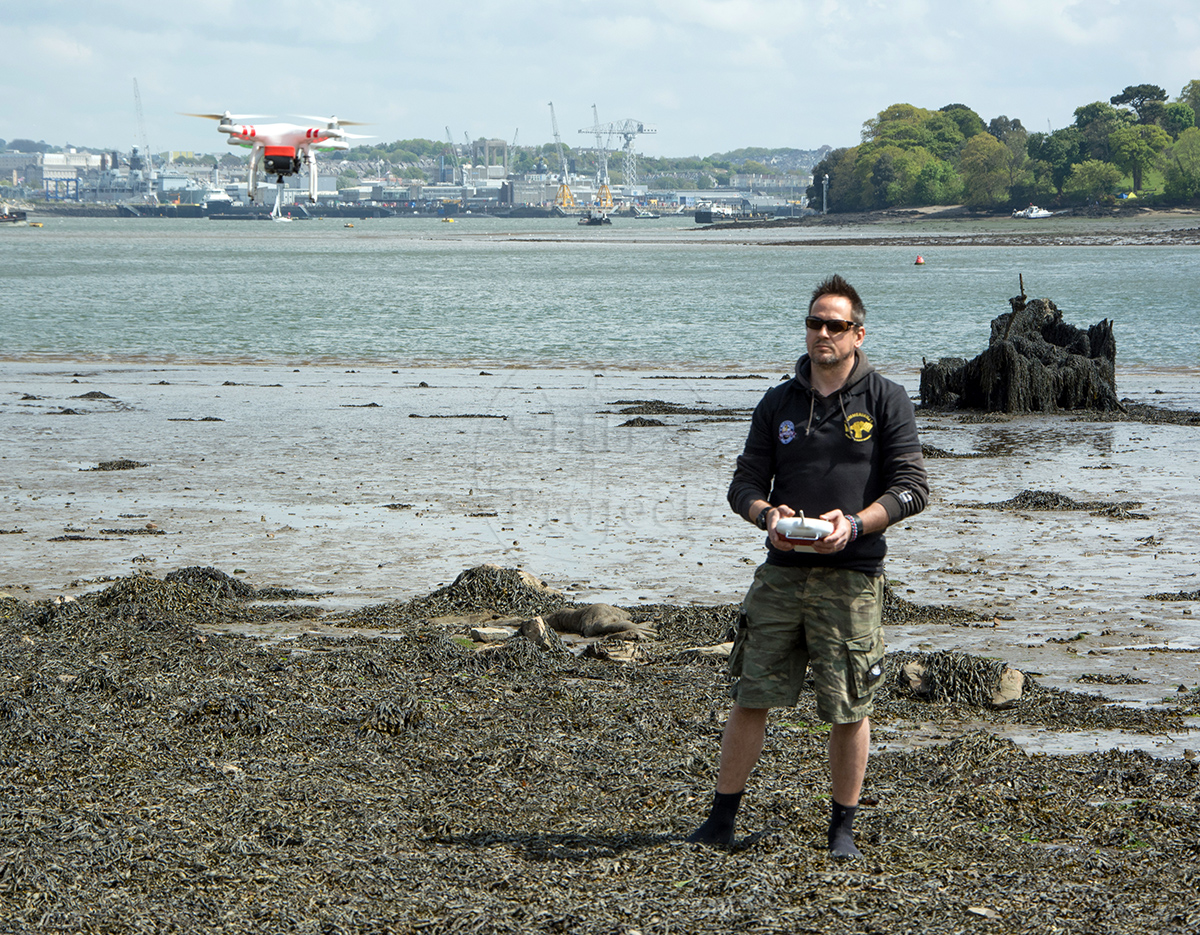 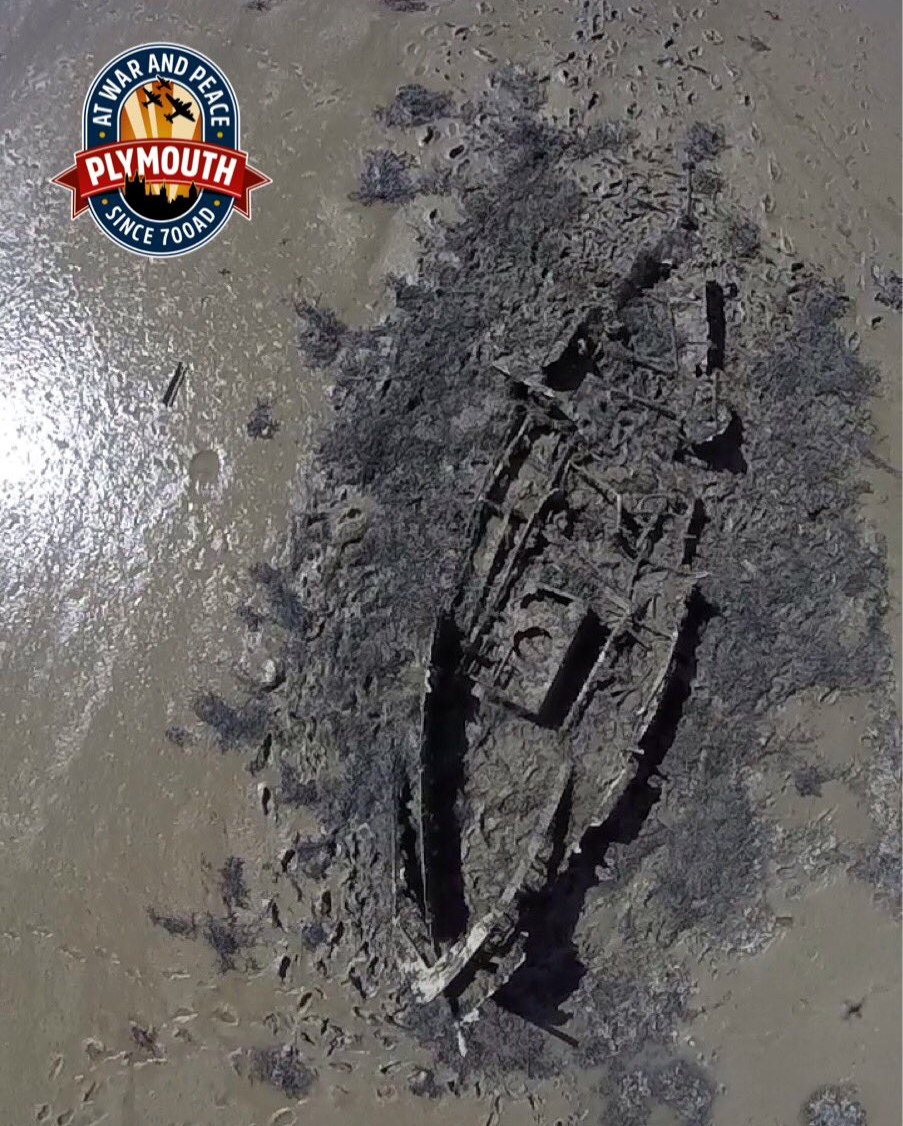