Very little has been done previously to record the abandoned vessels around Plymouth. Before the records of Martin Langley, Edwina Small and John Cotton in the 1980s, the historical significance of abandoned vessels was unrecognised and they were considered either foreshore litter or a resource to be used as a source of timber. Some 40 years later the review of the hulks shows that few still remain to be found and those that do are in a very degraded condition.

A guide to forgotten craft from Poole to Gloucester, published in 1988 by Martin Langley and Edwina Small by Stanford Maritime Ltd., London, ISBN 0 540 07431 4

This book has been the introduction to foreshore hulks for many people as it was one of the first to be published on the subject of abandoned ships. Langley and Small produced this book in 1988 and as such were ahead of the curve in their interest in hulks. The book is a catalogue of abandoned vessels around the western counties collated and researched with the help of many people, public bodies and companies, including John Cotton who provided much of the original information published here.

The hulks around Plymouth are listed in pages 58 to 86 covering the rivers Plym, Tamar and Lynher. The authors of this book were lucky enough to be able to see remains of vessels in a more intact condition and at a time when more people remembered the names and history of the hulks. In many cases nothing at all remains of the hulks other than the record in this book and John Cotton's archive so in many ways the current interest in this type of foreshore archaeology is too late. The book also includes accounts of interesting boats that were not abandoned like the smack J.N.R., the ketch Garlandstone and the Tamar barge Shamrock, or the very few lucky ones that were once abandoned but now rescued, like the Tamar barge Lynher. The book is comprehensive and as such the list of hulks that they missed is quite short, including the Edwin, the hopper barge in the Torpoint ballast pond, Prince Rock 1, Stonehouse 1, the WWII minesweeper YMS-378, and the Plym dredger. Some hulks listed here were abandoned after the book was written such as the Ocean Maid in the Laira, Lotus Bleu, Pomphlett 1 and Anje in Pomphlett Lake, Anna II in the Tamar. The book also does not include vessels that were wrecked rather than abandoned so does not mention ships listed by us such as the steamship Vectis and steam trawler Chancellor.

The information published on this website about foreshore hulks is based on information from this book. In fact this book has been the basis of most publications about abandoned ships in the Plymouth area. Today we have more information available to us so the records have been updated and errors corrected, but the essence is the work of Langley and Small and as such we owe them a debt of gratitude.

C. John Cotton recorded, photographed ad identified a number of abandoned vessels in the Plymouth area in the early 1980s and some of his work has been published on his Historic Shipping website under the section 'Plymouth Hulks - The forgotten ships around Plymouth'

. The section of The SHIPS Project website about foreshore hulks has been put together with the kind assistance of John who shared his research material with us and allowed us to copy and publish his photographs.

The website contains a list of more than 30 abandoned vessels investigated by John along with their histories and anecdotes about how the vessels were located or identified. John has provided a record of the numerous hulks around Plymouth from nearly 40 years ago, a unique resource that allows us to quantify changes in the vessels in that time and more importantly, provides the only record of the vessels that have now completely disappeared. John identified a number of vessels that were not included in Lost Ships of the West Country, such as the WWII minesweeper YMS-378, the Tamar barge Edwin and Brunel's Millbay Pontoon, and noted the unknown vessel we have named Stonehouse 1. The Historic Shipping website is not maintained but any errors in the original Historic Shipping website have been corrected where known in the equivalent pages in this website.

Shipping and Trade of the River Tamar (Ian Merry)

Published in 1980, part II of this book by Ian Merry includes a compendium of Tamar barges, smacks, sloops and ketches that worked in the waters around Plymouth. This extremely detailed and well-researched monograph also includes notes about the fate of some of the vessels so has been used by many researchers to locate or identify abandoned sailing vessels.

The University of Plymouth survey of hulks in the Plymouth area published incomplete in 1999 by Martin Read. Largely a copy of the books Lost Ships of the West Country and The Shipping Trade of the River Tamar (above) with a observations from students and very little original new research. The fieldwork seems to have been done by students with little appreciation for ship construction and no appropriate supervision, so other than noting the presence or absence of a vessel little more is added and some of the conclusions are incorrect. The text of The Tamar Hulks Survey is a series of disconnected notes with no attempt at synthesis, which Read tries to excuse with the title 'Draft' even though it was published more than 20 years ago and is referred to in his own published papers. The references include a number of reports which the author has not published and are thus unavailable for review, which are presumably student dissertations as there is no other information except author and title.

Appendix 7 of this report was written by Martin Read, where he claims that during hulk recording as part of the fieldwork for Plymouth University students 'over 50 hulks have been located by the surveys and many of them identified' (p231). The report is simply a re-hash of the book Lost Ships of the West Country by Langley and Small, it includes the same errors and mentions only one or two hulks that are not included in that book. There is no evidence for the student fieldwork, just references to other documents that report the work was done 'under the supervision of Martin Read', and the actual fieldwork has never been published.

until his untimely passing in 2015. On the website and in his books on Plymouth's shipwrecks Peter has included information about the diving tender Emma Christ wrecked on the beach in Whitsand Bay, the concrete barge Cretabode in St. John's Lake the steamship Vectis and the Drake's Island Barge. The SHIPS Project now curates Peter Mitchell's archive of research documents and photographs and as such some of Peter's previous work is included here.

English Heritage Project No. 5919 published in September 2011 by Louise Davies for the Museum of London Archaeology (MOLA).

The primary aim of the project, as set out in the Project Design (MOLA 2010), is to conduct an audit of the known resource, and to identify, plot and quantify all known hulk assemblages in England. However, despite the existence of a well-known published book on the subject, the report fails to mention any of the hulks around Plymouth other than one reference to a modern barge off Cargreen and survey reports covering the river Tamar and Hooe Lake. 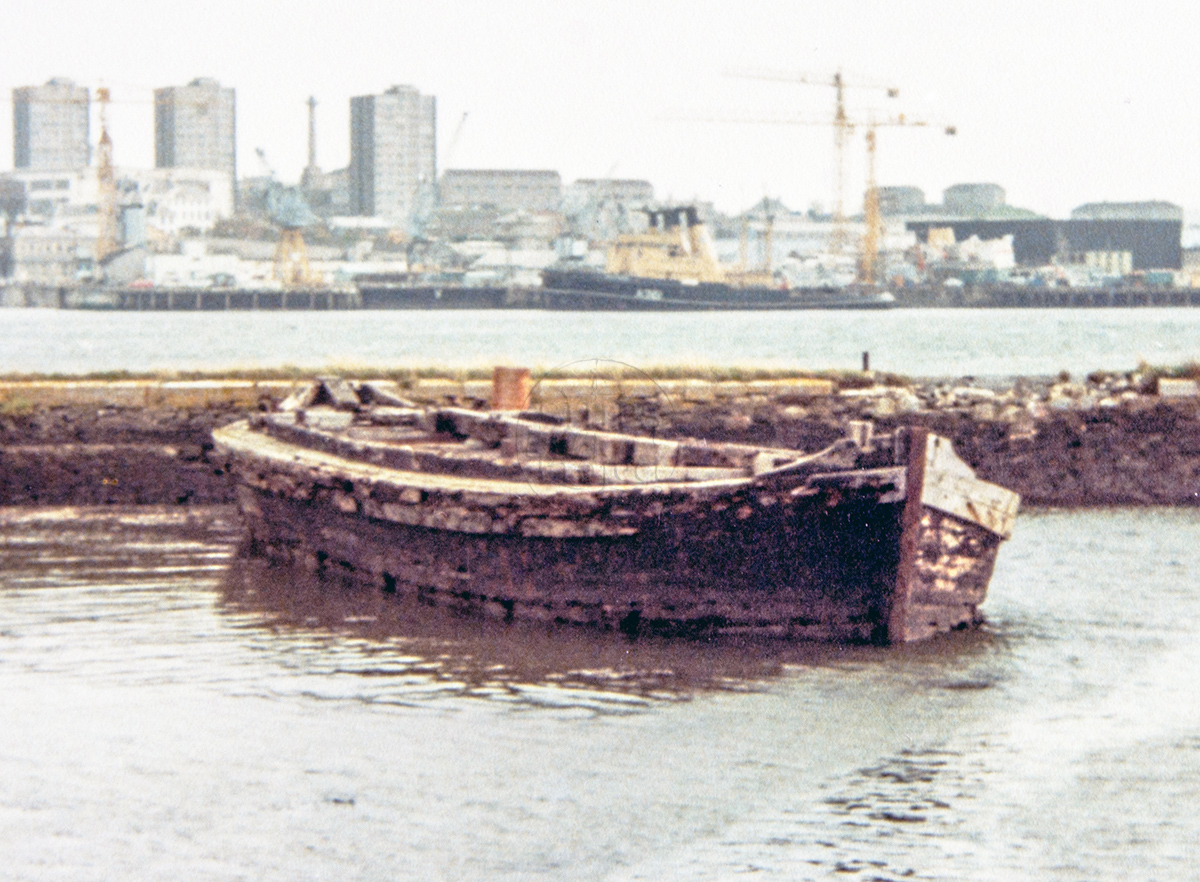