A Scottish fishing boat abandoned on the banks of the Laira, Plymouth.

The 60 ft timber-built trawling / ringnet fishing vessel Ocean Maid (CN-266) was constructed by Fairlie Yacht Yard in Ayrshire for A. & M. Macmillan of Carradale, Scotland, in 1967.  The Ocean Maid was 24m long, 6m wide and 37 tons, originally powered by a 365 hp Caterpillar engine which gave her a speed of nearly 11 knots which was very fast for this type of boat.  Her fishroom could hold 200 crans and her cabin had accommodation for a crew of seven.  A cran is an old unit of measure of landed uncleaned herring used in the North Sea fishing industry. In 1852 it was defined to be the equivalent of one standard box of about 37.5 imperial gallons or 170.5 litres.

The Ocean Maid spent some time working out of Isle Oronsay on Skye when she was owned by Iain Noble.  Renamed Maighdean Bhan in 1974 or 1975 with port number SY-193, she later returned to Carradale.  As Ocean Maid she was offered for sale in 1978 by Murdo MacLeod when at that time the boat was rigged for trawling and a quantity of trawling gear was to be sold with the boat. In May 1984 she was deregistered and converted to a commercial cruise boat.  A family bought the Ocean Maid in 1994 or 1995 from Bangor in North Wales, sailing her down around Cornwall to Treluggan Boatyard on the River Lynher near Plymouth.  The intention was to fully restore the fishing boat but there was too much work to be done, and a fire in the cabin led her to be sold shortly after.  Her last owner planned to restore the Ocean Maid at Blagdon’s Yard on the River Plym, so he had her towed around to the Laira, however the plan did not succeed and she was beached and abandoned on the shore of the River Plym just south of Blagdon's Yard in 2007.

Intact when first abandoned and lying hard up against the shore on her port bilge, by 2009 the Ocean Maid had some side timbers removed for firewood, but her paint scheme was still recognisable and her nameboard was in place. By 2017 more side timbers had been removed and her deck was starting to collapse. In 2020 the middle section of the hull has collapsed in on itself and the hulk is starting to crumple and flatten out.

This wreck gives us clues about how long it takes for abandoned wooden vessels to collapse and break up. This type of ship were very solidly built and many of them continued to earn their keep as prawn trawlers into the 21st Century, but this one is now suffering the effects of years of neglect. Despite being well built and in a sheltered location, this vessel is collapsing after only 13 years on the shore.

This hulk was identified from her name board.

The Ocean Maid lies on the West bank of the Laira just South of Blagdon's Boatyard.

Ocean Maid can be seen easily from the footpath that runs along the old railway line between the A374 opposite the concrete contractor E & JW Glendinning and Laira Bridge. Walk along the footpath and the wreck lies close by over a timber fence.

Thanks to Chris Adams, Neil Alexander and contributors at trawlerpictures.net for information about the Ocean Maid.

and the Plym dredger 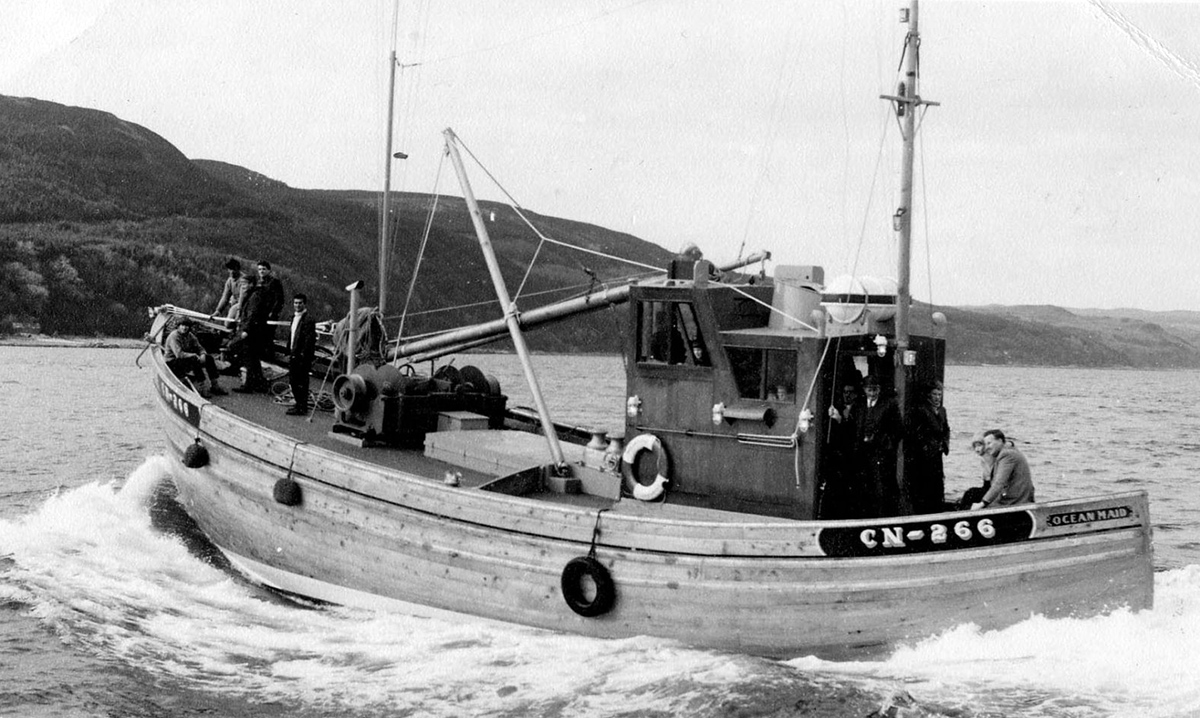 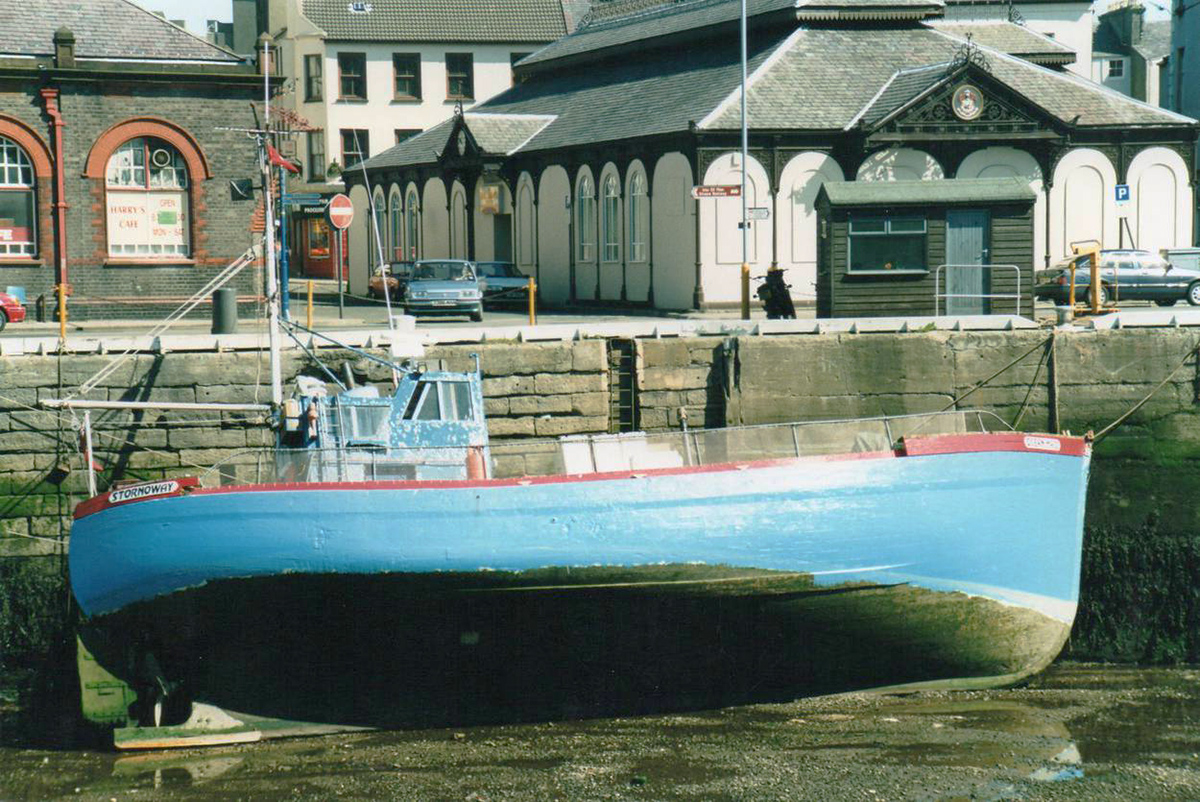 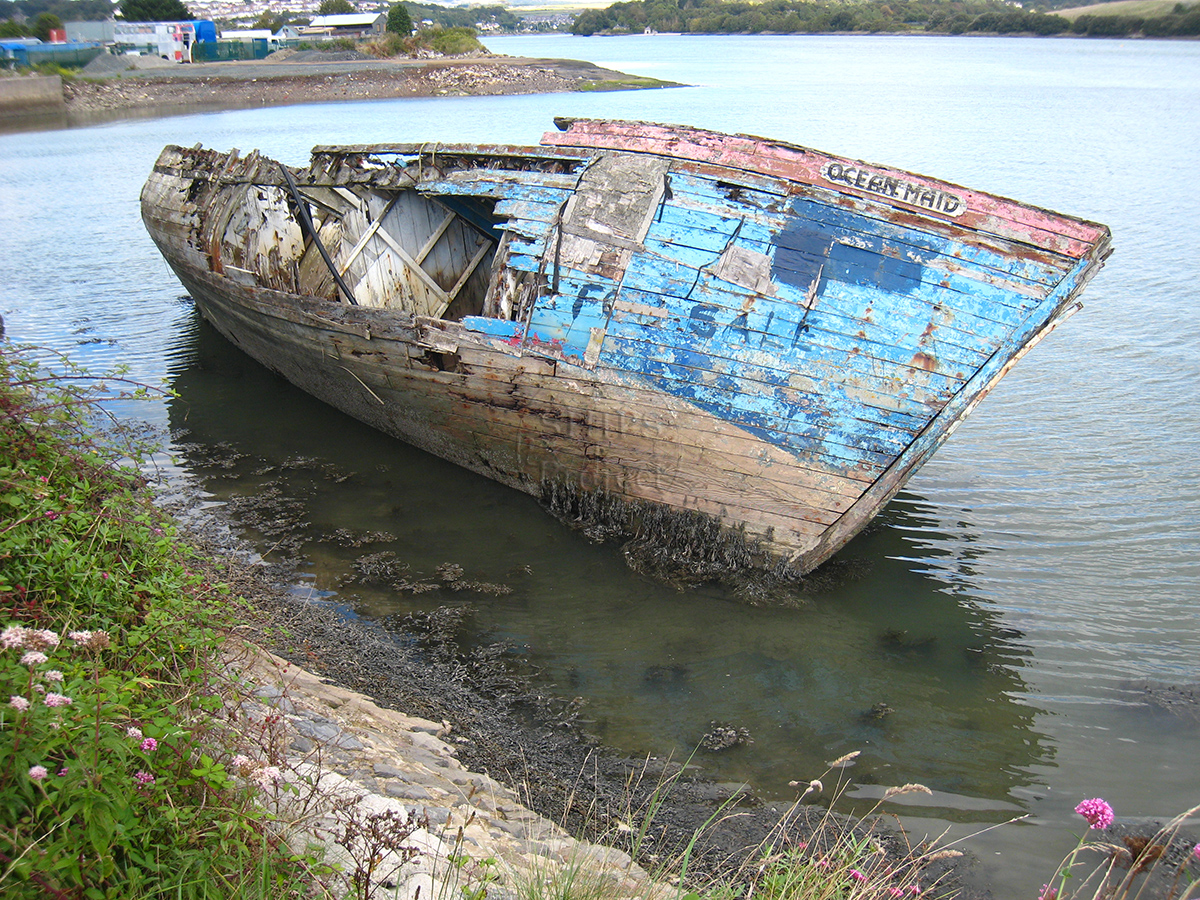 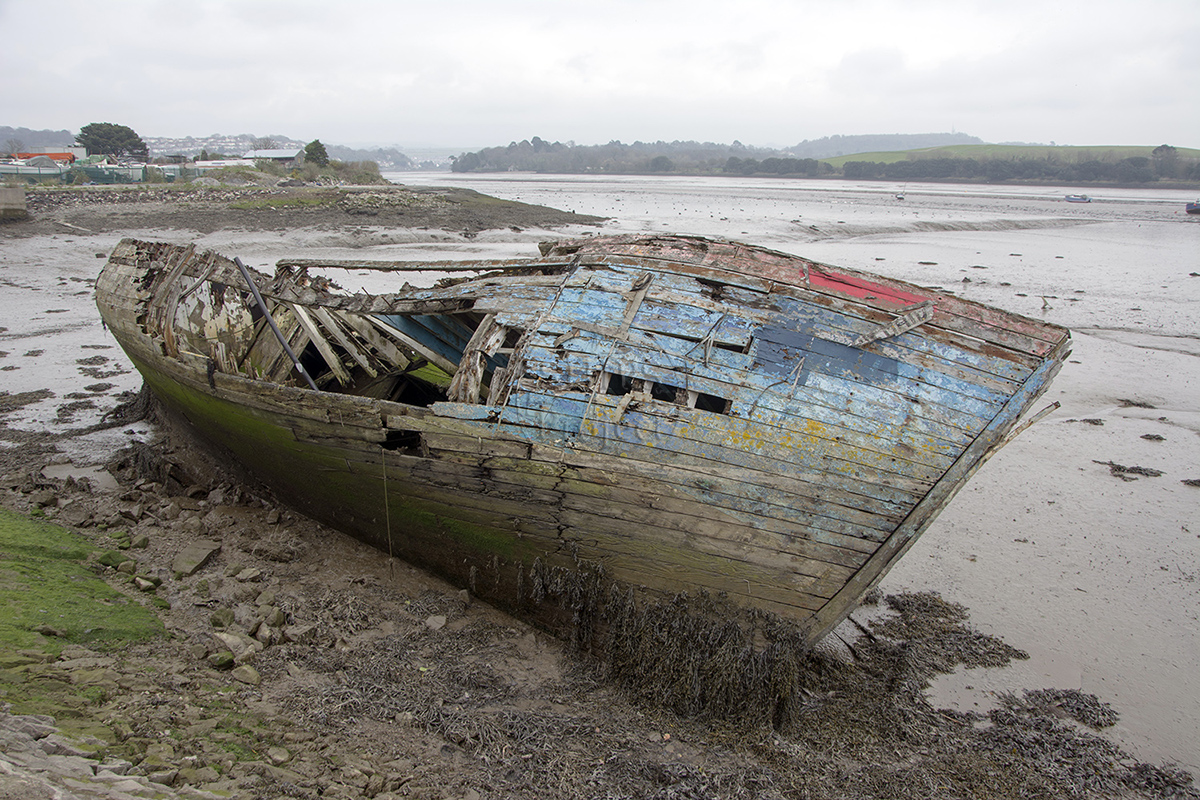 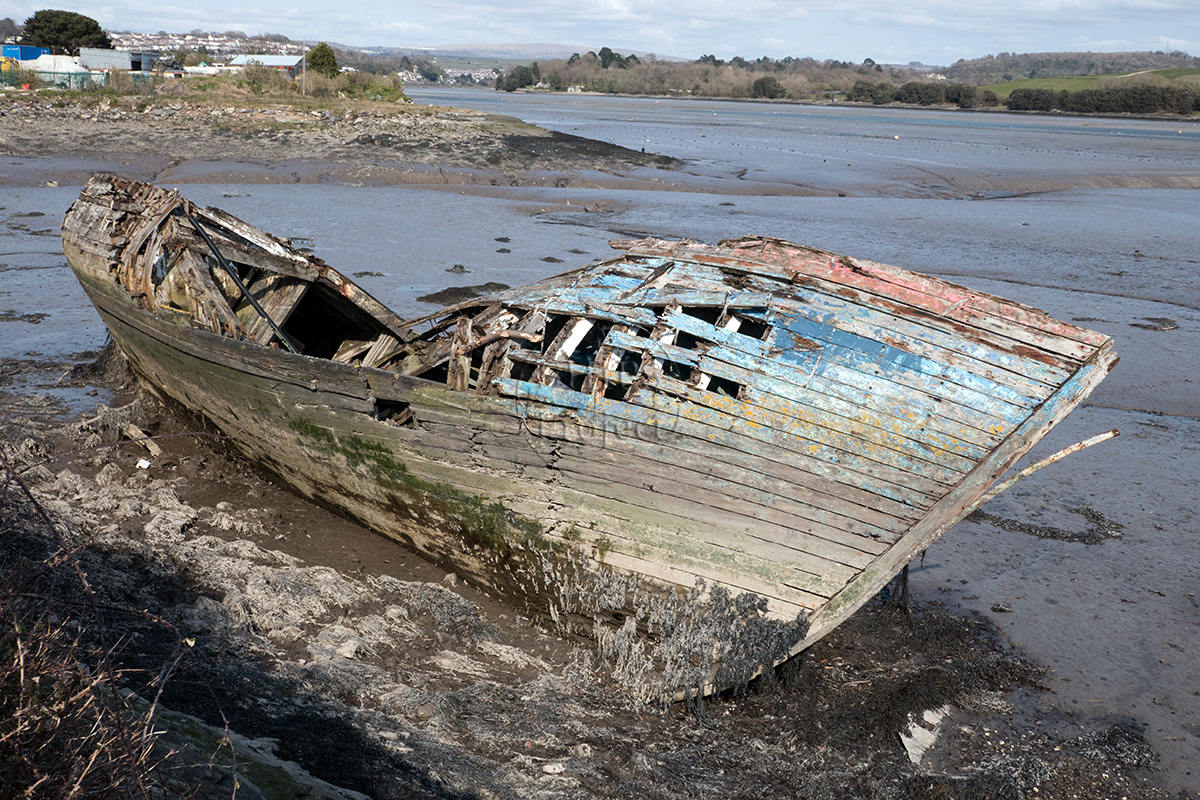 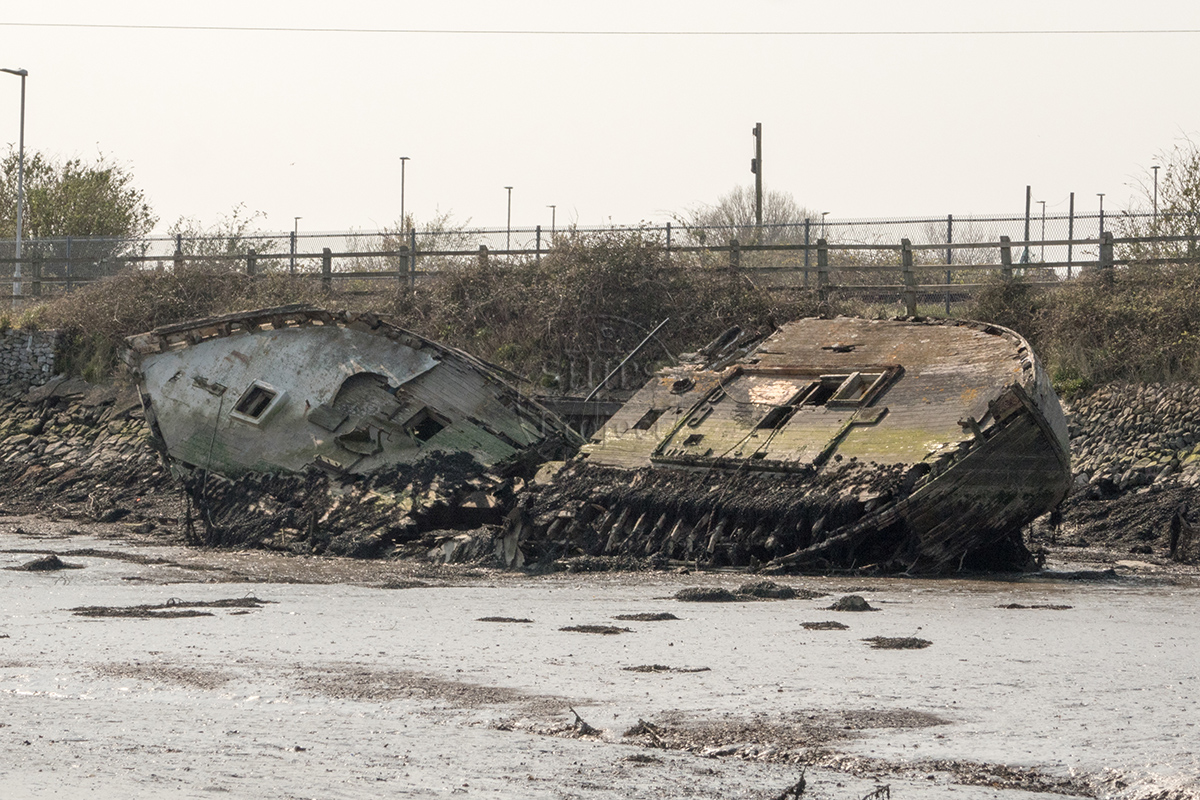 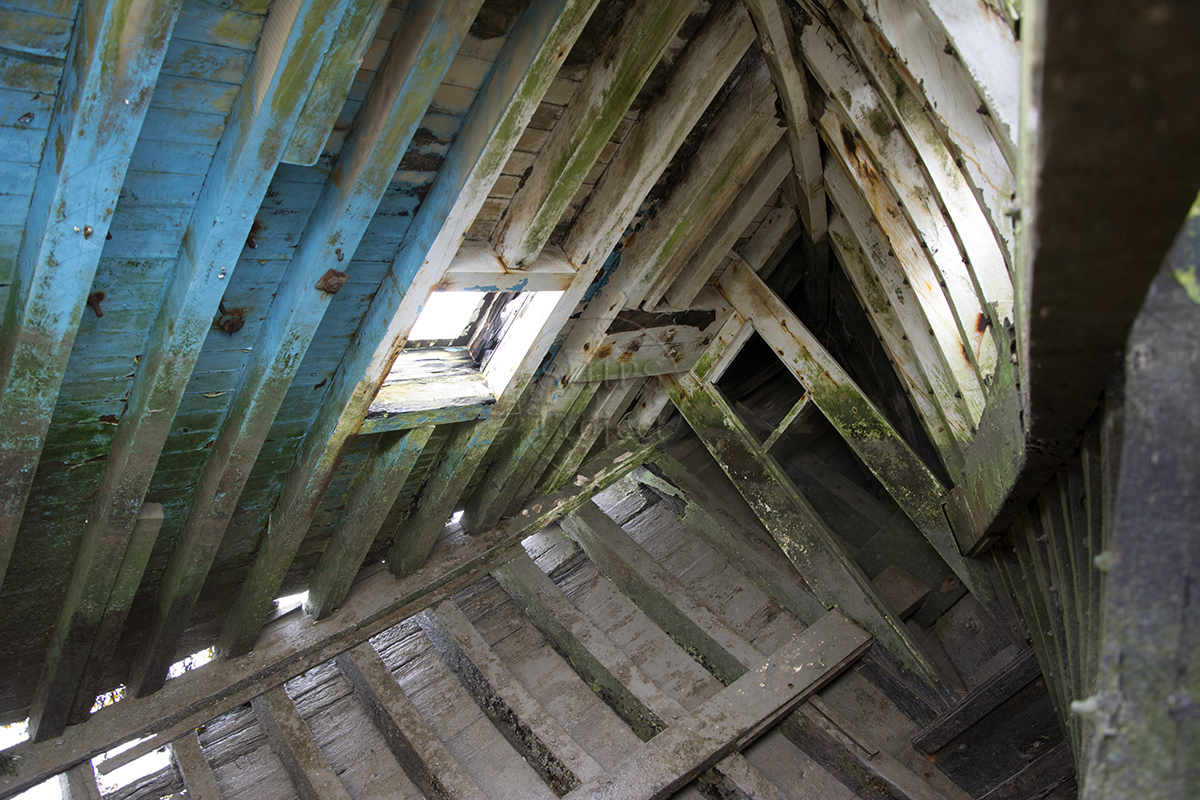