The steam trawler Chancellor was wrecked on Treninnow Beach in Whitsand Bay, Cornwall, on 17th January 1934.

Launched on 20th February 1901, the steel built steam trawler Chancellor was ordered by the Dodds Steam Fishing Company from shipbuilders A. Hall & Co Ltd in Aberdeen, Scotland.  The 32m long ship had two ketch rigged masts for sails, a wheelhouse amidships and funnel abaft and was powered by a 53 h.p. triple expansion steam engine built by the shipyard.  By 26th March 1901 the Chancellor had been completed at the yard and was registered at North Shields with number SN279.  In 1911 the Chancellor had moved to Aberdeen, Scotland, bought by Robert Craig and A. & J. Leiper and registered with number A423 then in 1916 she was sold to the Port St. Mary Fishing & Curing Co Ltd., London.  On 29th May 1917 the Chancellor was requisitioned for the Fishery Reserve, fitted with a 6 pdr. Hotchkiss gun and two gunners were added to her crew, but by 1919 she had been released back to normal service and the gun removed.  In July of that year she moved again, this time to Fleetwood as she had been bought by Ernest Taylor & Noah Ashworth and registered as FD339.  In 1924 she was sold to John Chant in Plymouth and in 1931 she was sold to Plymouth Trawlers Ltd. to fish the west of England grounds.

On 15th January 1934 the Chancellor sailed from Plymouth to fish off Falmouth with a crew of 9 including her skipper, Edward Charles Rowe, bosun Mr Wilfred Scoble, Chief engineer James Chant and third hand Mr William Penberthy.  By 02:00 on 17th the Chancellor was 12 miles to the west of the Eddystone, but she had to stop fishing as the weather had closed in and visibility was poor.  The Eddystone light had last been seen an hour earlier bearing east north east about seven miles away so by the time they decided to head back to Plymouth at 02:50 they were unsure of their true position.  Using a combination of dead reckoning and clues from the type of fish and seabed material being trawled up, the skipper thought he was 7 to 9 miles to the west south west of the Eddystone Lighthouse.  Rowe set his course to north east by east and set off in the rain and with a south west wind force 7 to 8 with the ship running at her full speed of 8 knots.  From 02:50 with the weather worsening the skipper was in the wheelhouse with the boatswain, Wilfred Scoble, and a deckhand, William George Penberthy.  At 04:10 the skipper went below leaving Penberthy on watch.  Just before 04:30 Penberthy noticed a change in the water, like sea breaking on the shore, and what he took to be a bank of fog.  Unfortunately, the fog was actually the cliffs of Withnoe Point and the Chancellor drove up hard onto the sandy beach of Whitsand Bay.

The Chancellor beached just before high water with a strong wind behind her so she was carried a long way up the beach. Fortunately the ship wedged between two sets of rocks, jamming her in and keeping her upright, but plates on her bottom were buckled and she rapidly took on water. The skipper tried to refloat her by ordering full astern on the engines, but as this had no effect he knew the ship was lost so ordered the engines full ahead to push her further on shore in the hope of saving the crew.  The crew sounded the horn, burned flares and burned all their bedding to attract attention, this alerted the Tregantle coastguard at about 05:25 who then requested the Plymouth lifeboat Robert and Marcella Beck be launched. The lifeboat got to the scene with some difficulty because of the weather but coxswain J. S. Roach was unable to get close enough, at one point the lifeboat struck the bottom and herself got stuck but managed to free herself. Unable to help directly the lifeboat stood offshore and illuminated the wreck with her searchlights. By this time the tide had risen and the unusually rough seas were now breaking over the wreck. The Chancellor's nine-man crew were eventually rescued by the Portwrinkle breeches buoy with the skipper, Rowe, the last to leave at about 08:30. Mrs Rogers of Polhawn took them in and gave them food and hot drinks.

"We watched and waited whilst the rocket apparatus did its work, and then, when we had the signal that all hands were safe ashore, we came back after a very nasty experience in Whitsand Bay" J. S. Roach.

The Chancellor was a total loss and broke up where she lay on the sand in Whitsand Bay, left to be broken up by the sea and the people living nearby.

The formal investigation by the Board of Trade found the skipper Rowe to be at fault for the loss of the ship as he took undue risks by heading for home at full speed from an unknown position, in very bad weather and without taking soundings at any time.  As a punishment for his recklessness Rowe’s skipper’s license was suspended for twelve months.

The remains can be found lying on and within the sand between some large rock outcrops, the sand levels change on the beach periodically covering and uncovering the wreck so you are never sure quite how much you will see on any visit.  The 2.8m long boiler stands proud of the seabed, jammed up against a rock, with the outside polished to a shine by the moving sand and a small stream running through the middle.  To the south can be found what remains of the Hall triple expansion steam engine, just the crank and counterweights lying on the sand.  When the sand levels are low some of the hull can be found alongside the boiler with her bows pointing towards the shore (Fig 6) The occasional item of hull structure can be found scattered along the beach and her propeller is rumoured to still be buried on the beach.

Some parts of the ship have been salvaged and have been used in the holiday huts on the cliff above and her anchor is in one of the gardens nearby.

One of the stories about this ship says that the split in the boiler (Fig. 7) was made by military personnel in WWII who were experimenting with shaped explosive charges.

The remains of the Chancellor can be seen at low tide on 'Boiler Beach' under Withnoe Point in Whitsand Bay and a path leads from the road above down the very steep cliff to a point just behind where the wreck lies. Whitsand Bay is a popular place to walk so this wreck will have been seen by far more people than usually visit the wrecks that are found underwater. The wreck is usually covered in sand with just the big boiler showing as it was in 2013 when we first visited the site but sometimes the sand moves away and uncovers extensive remains of the hull, as it did after the big storms of February 2014.

Nearby hulks include the dive tender Emma Christ

and the unknown vessel Whitsand 2

Video of the Chancellor

The Chancellor high and dry on the beach shortly after being wrecked.

and not the Chancellor. 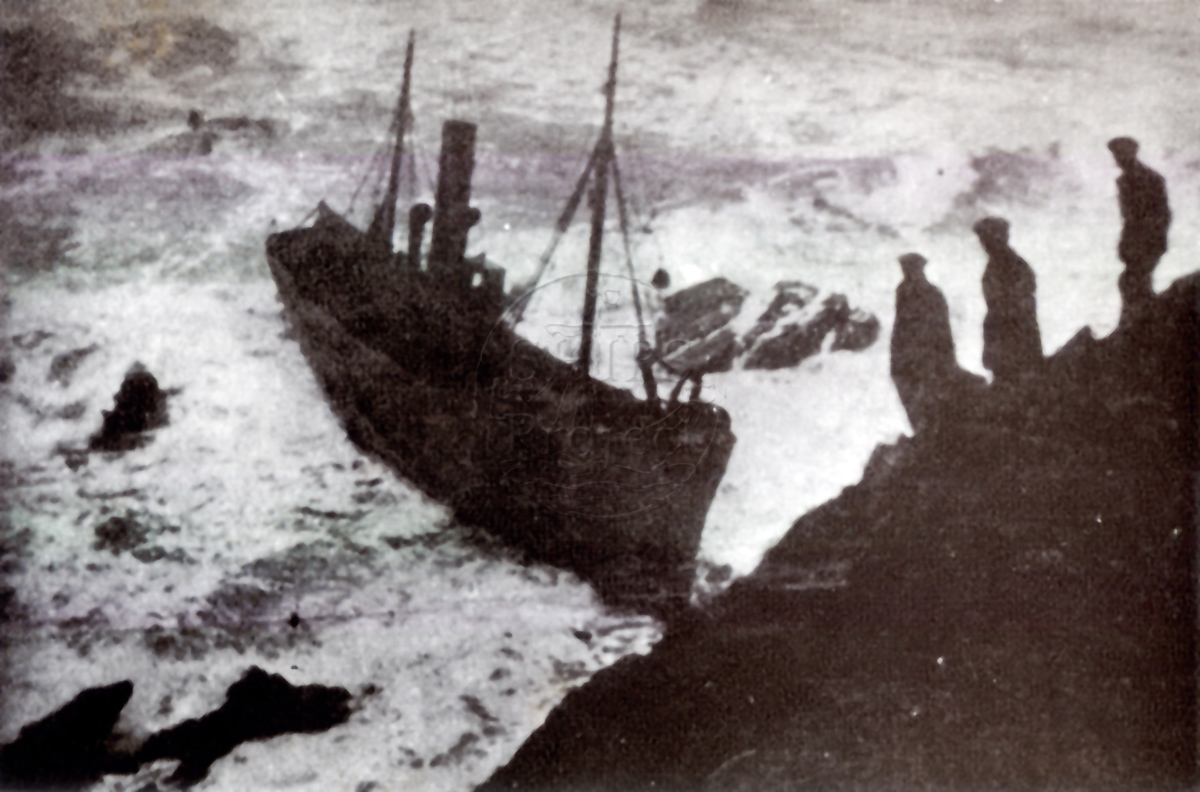 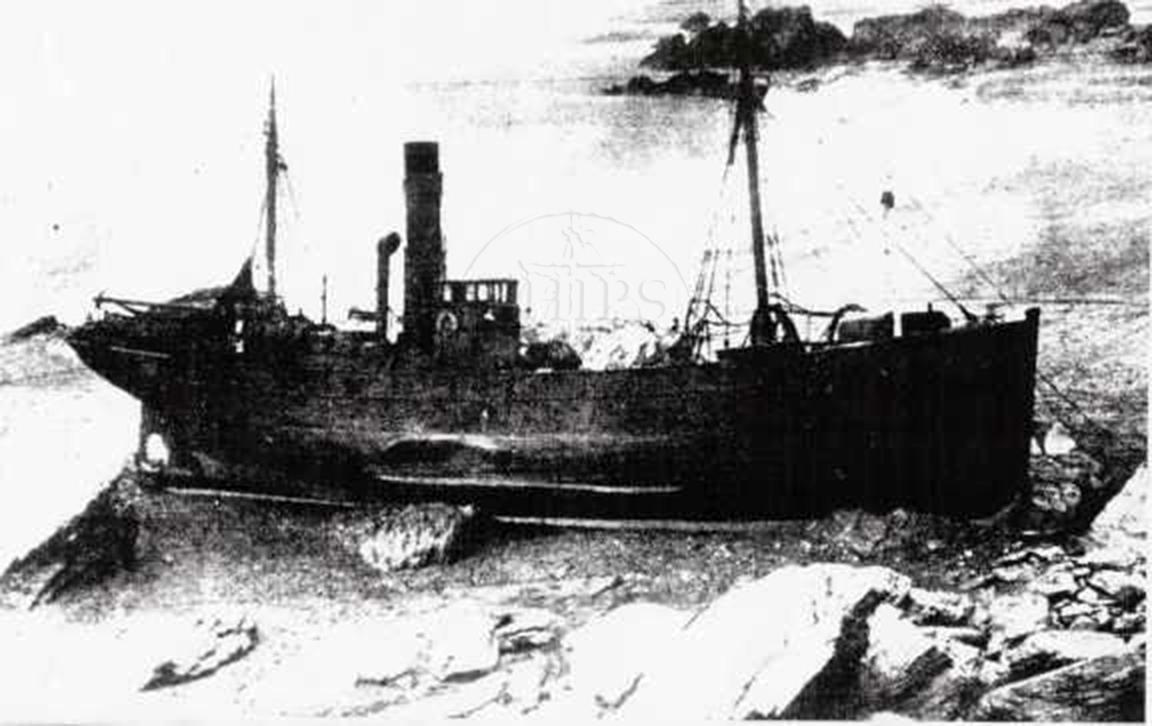 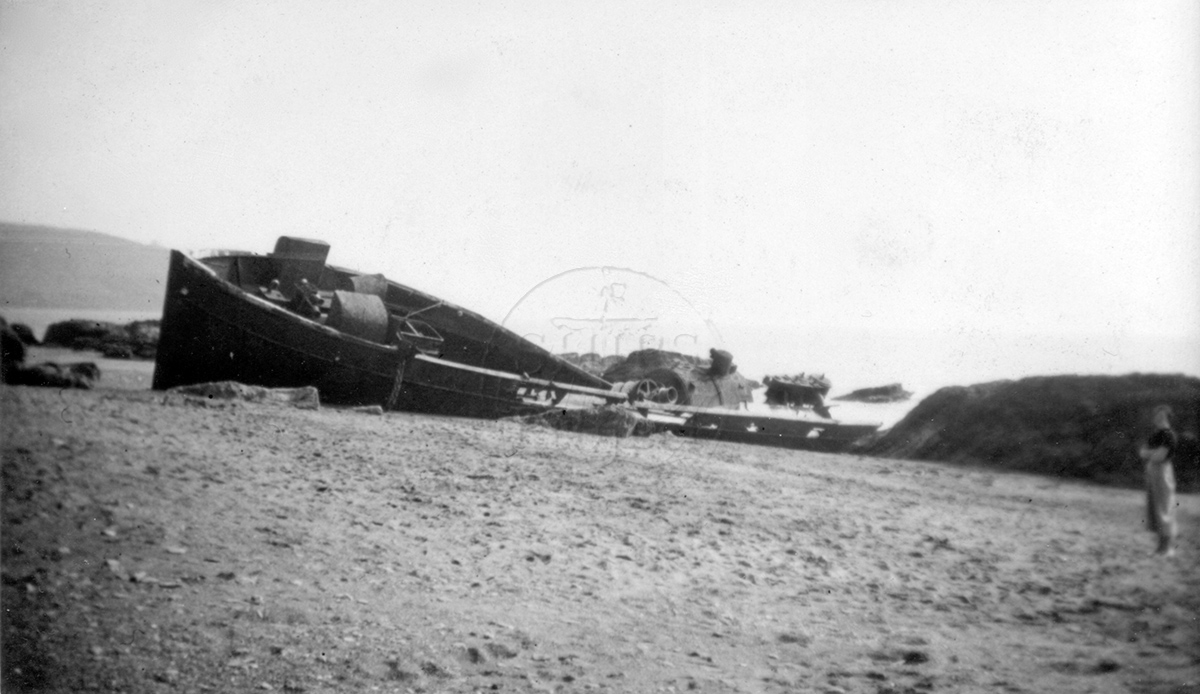 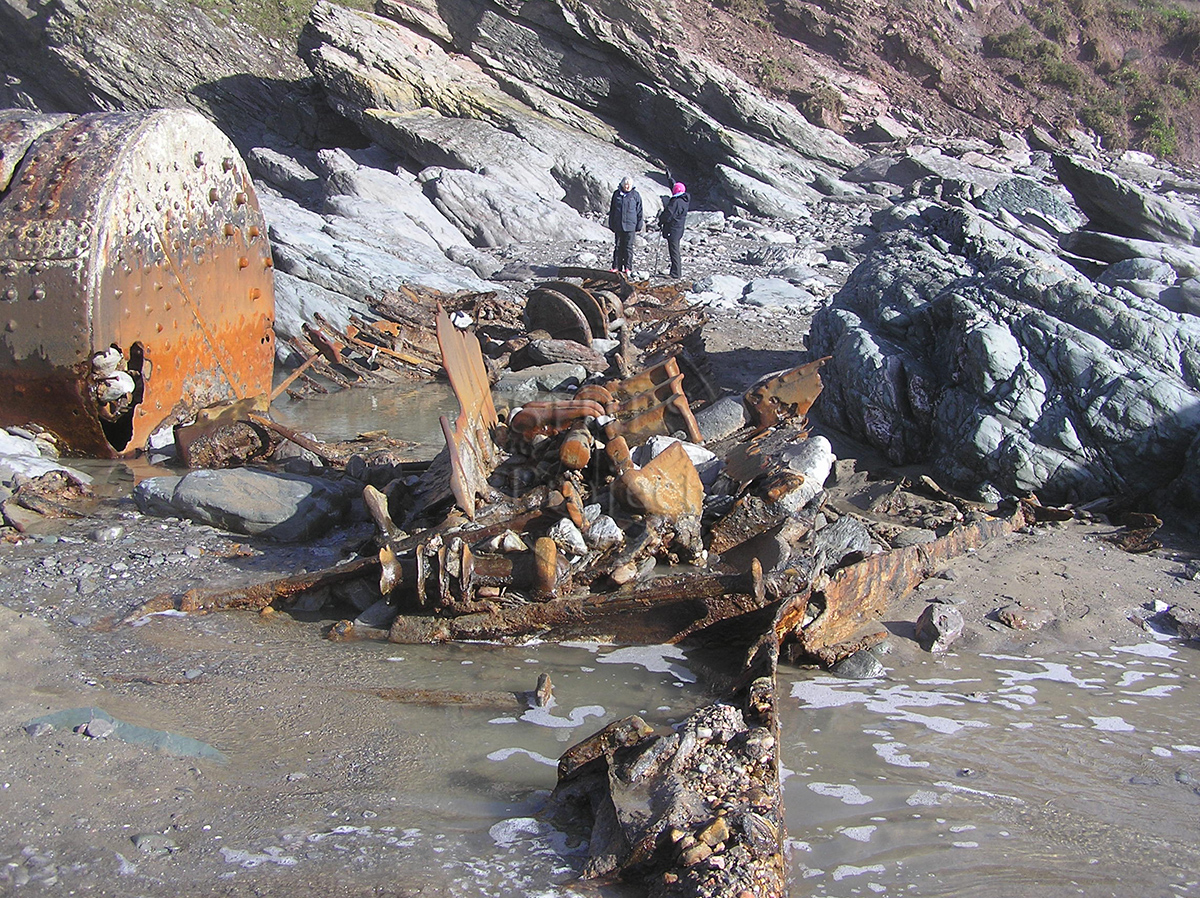 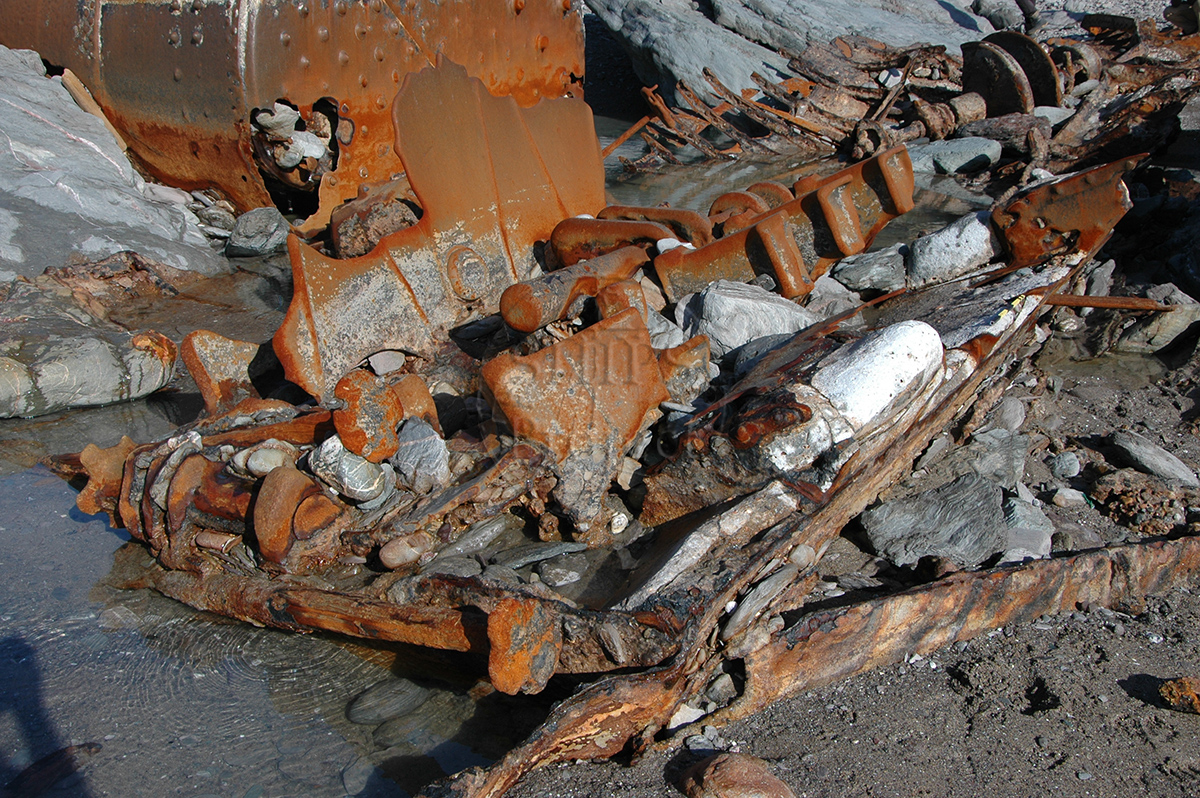 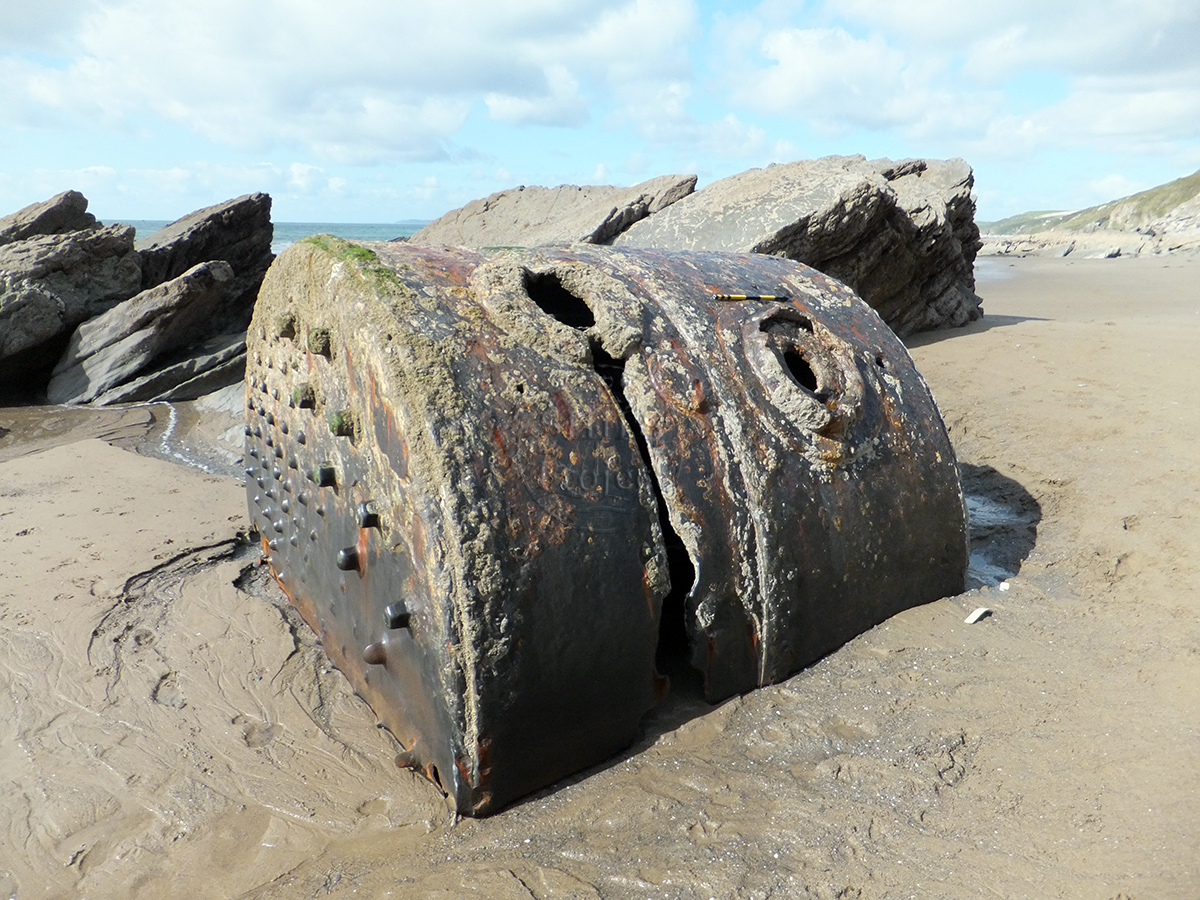 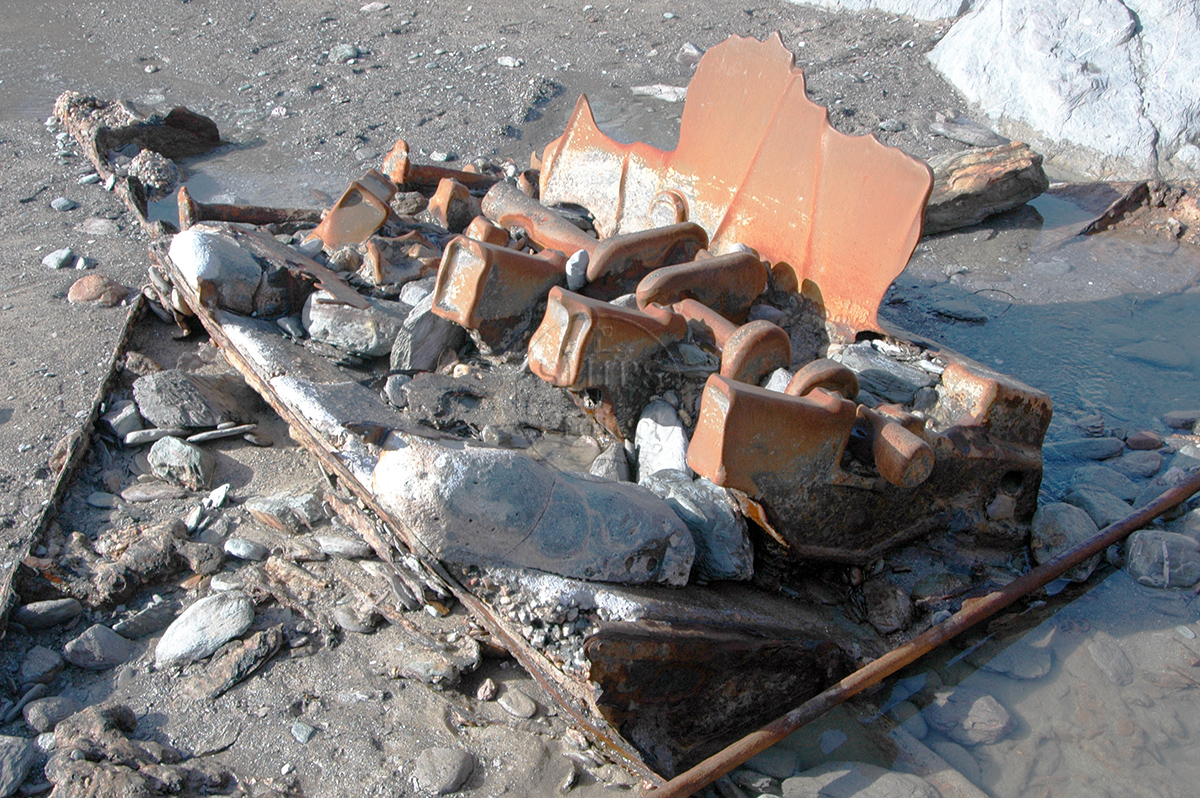