Short Sunderland Mk II flying boat W6054 crashed on landing in Plymouth Sound in thick fog on 13 November 1942 at approximately 9pm. The aeroplane from 10 squadron Royal Australian Air Force (RAAF) was bringing back five passengers from Gibraltar to Plymouth, piloted by Flight Lieutenant Wynton Thorpe and a crew of 11 airmen.

Among these five passengers was Canadian-born Captain Frederic Thornton `Fritz` Peters, DSO, DSC and bar, DSC (U.S.) of the Royal Navy. The injured Peters had only just been released from a Vichy French jail at Oran Harbour by US Forces on 10 November after leading Operation Reservist, where HMS Walney and HMS Hartland carrying a crew of commandos and US marines had attempted to capture the Algerian harbour two nights previously. The two warships flew American flags in the hope the French would not attack but they soon came under point-blank fire from shore batteries, a cruiser and destroyer. The ships broke through the boom defence but were hit many times despite laying a smokescreen; Walney made it to the jetty on fire but sank alongside with her colours flying while Walney was blown up losing half of her crew. Blinded in one eye, Peters was the only officer to survive in Walney, where he and 13 others made it ashore before being captured. Peters was released two days later when the garrison surrendered to the Americans and was taken to Gibraltar to fly directly to a briefing with Winston Churchill about the attack. Peters was awarded the US Distinguished Service Cross by Dwight D. Eisenhower and posthumously awarded a Victoria Cross for his actions at Oran. Another passenger, Cdr Devlin, had come out of retirement to work on torpedoes at HMS Vernon and was returning from Gibraltar to Gosport.

With only 15 minutes of fuel left in W6054, the pilot attempted a blind landing but with the altimeter still reading 600ft the Sunderland ploughed into the sea. The aircraft flipped on its back, split in half and the pilot was thrown into the sea. Four passengers travelling in the wardroom of the aircraft were killed on impact while Flight Lieutenant Wynton Thorpe kept Peters afloat but he was dead when the rescuers arrived. The eleven crew were left in the sea for 90 minutes before rescuers arrived, three of them received serious injuries and others suffered minor injuries and exposure. Pilot Officer Bill Moore, the Sunderland's navigator, supported a fellow crewman in the freezing water for all that time and was subsequently Mentioned in Despatches for his actions.

'During the first part of the sortie, lightning, hail, sleet and very poor and bumpy flying conditions were encountered with headwinds of 35 to 40 knots. Seven and a half hours later, with strong headwinds still prevailing, Thorpe sent a message to base: 'May force land outside breakwater'. A further message was transmitted at 19.50 hours stating that there was only enough fuel remaining for fifteen minutes flying. Six minutes later the Sunderland approached the flare path near Mount Batten but overshot in the heavy fog and had to climb and circle to starboard before attempting another approach. The Sunderland continued to starboard and as it made a second approach in almost zero visibility suddenly crashed into the sea approximately one and a half miles from the breakwater lighthouse. The aircraft hit the water with the starboard wing down causing it to turn on its back and break-up'. [Maritime is Number Ten: a history of No. 10 Squadron RAAF, the Sunderland era, 1939-1945. Compiled and researched by Flight Lieutenant K.C. Baff. Griffin Press Limited, 1983. pp 248-249]

The remains of this Sunderland were found by diver Neil Griffin spread over a wide area on the north side of the breakwater between the Breakwater Fort and the lighthouse at the west end. Neil told The SHIPS Project that he had found the remains of what he thought were two aircraft, one spread over a large area and two large parts of one aircraft. A propeller and reduction gear was recovered by Neil Griffin in 1985 and shipped to the RAAF Museum near Perth. Another engine and parts of a fuselage were recovered by divers from Plymouth including Steve Roue, Roger Dadds, Terry Crocker and Paul Molyneaux was displayed at the Cornwall Aero Park near Helston in Cornwall which went on to become The Flambards Experience amusement park.

Please note that all aircraft in UK waters that have crashed during military service are protected under the Protection of Military Remains Act 1986. 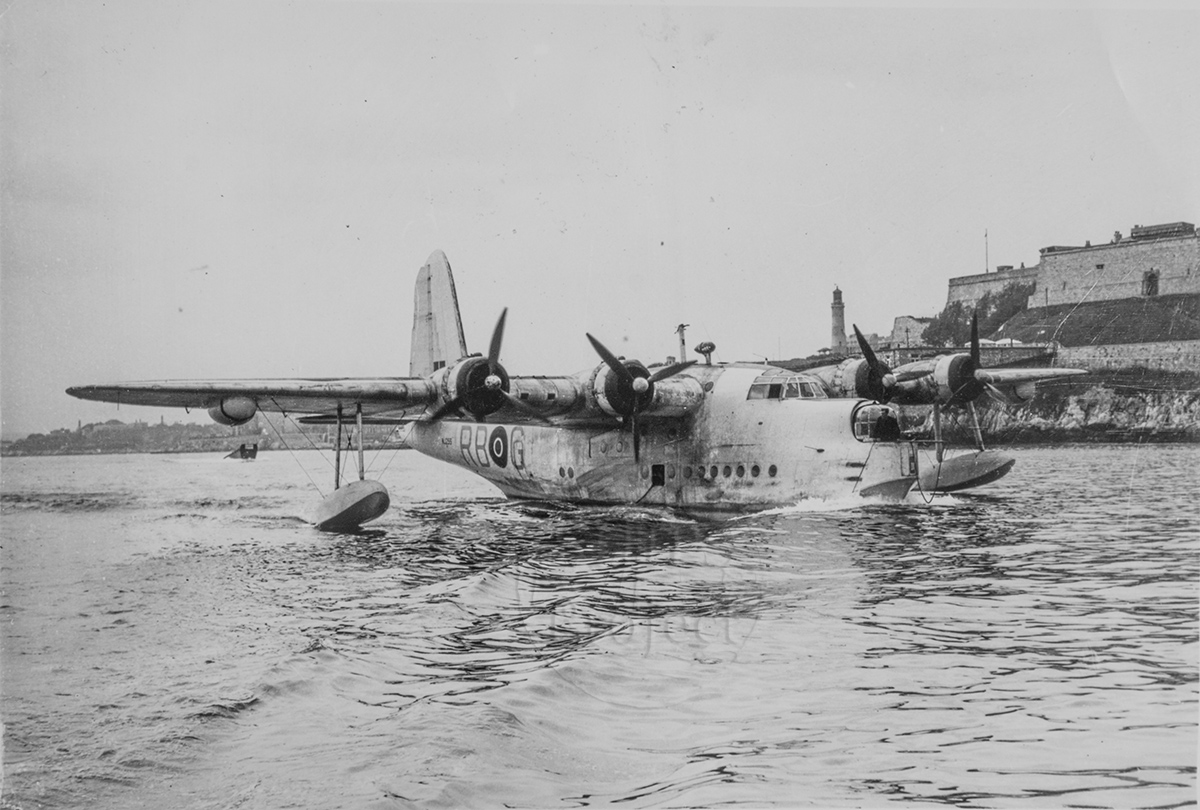